It Can't Happen Here is a semi-satirical American political novel by Sinclair Lewis published in 1935 by Doubleday, Doran. It describes the rise of a populist politician who calls his movement "patriotic" and creates his own militia (the Minute Men or "MM", paralleling Hitler's "SS") and takes unconstitutional power after winning election — mirroring what Hitler was doing in Germany at the time of writing. Its plot centers around newspaperman Doremus Jessup's belated realization of what is happening, and his subsequent struggle against the fascist regime of President Berzelius "Buzz" Windrip.

Berzelius "Buzz" Windrip, a charismatic and power-hungry politician, is elected President of the United States on a populist platform, promising to restore the country to prosperity and greatness, and promising each citizen $5,000 a year (approximately $80,000, adjusted for inflation[1]). Once in power, however, he becomes a dictator: he outlaws dissent, puts his political enemies in concentration camps, and creates a paramilitary force called the Minute Men who terrorize the citizens. One of his first acts as President is to make changes to the Constitution which give him sole power over the country, rendering Congress obsolete (in real life the President is not part of the Constitutional Amendment process at all). This is met by protest from the Congress as well as outraged citizens, but Windrip declares a state of martial law and, with the help of his Minute Men, throws the protesters in jail. As Windrip dismantles democracy, most Americans either support him and his Corpo Regime wholeheartedly or reassure themselves that fascism "can't happen" in America (hence the book's title).

The few who openly oppose Windrip's regime form a secret protest organization called The New Underground, establishing a secret propaganda periodical under the alias The Vermont Vigilance. Journalist Doremus Jessup, Windrip's loudest detractor, becomes a major contributor to these publications, writing editorials decrying the state's abuses of power. Shad Ledue, head of the state police and Jessup's former employee, terrorizes him, eventually putting him in a camp; he also goes after Jessup's family, attempting to seduce Jessup's daughter, Sissy. Eventually, however, Ledue falls out of favor with Windrip, and he is put in the same camp as Jessup, where he is murdered by the angry inmates he sent there. After Jessup's friend bribes a guard, Jessup escapes from the camp, rejoins his family, and goes to Canada to join a resistance movement. 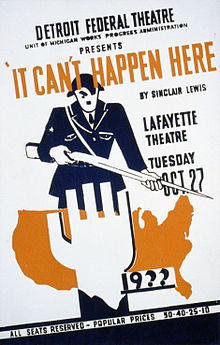 Poster for the stage adaptation of It Can't Happen Here, October 27, 1936 at the Lafayette Theater as part of the Detroit Federal Theater

In time, Windrip's hold on power begins to weaken; the economic prosperity he promised has not materialized, and more and more people (including his own Vice-President) are fleeing to Canada to escape his government's brutality. Windrip's lieutenants stage a coup; Windrip's right-hand man, Lee Sarason, becomes President and has his former boss exiled to France. In the ensuing power vacuum, Windrip's lieutenants fight among themselves for control, setting the stage for the regime's self-destruction. After another coup, ousting Sarason in favor of General Haik, the Corpo Regime's power slowly starts seeping away and the government desperately tries to find a way to keep the people content. They decide to stir up patriotic fervor by slandering Mexico in the state-run newspapers, with the idea that an all-out invasion of that country will rally the American people around the government. But the resulting draft of 5 million men for the invasion splits the country into factions: those pro-war and loyal to the Corpo government, and those anti-war who now see that they have been manipulated for years. A half-Jewish general, Emmanuel Coon, launches a civil war against the regime. The story ends with Jessup as a guerrilla in Minnesota, operating under Walt Trowbridge, the leader-in-exile of the opposition movement.

In 1936, Lewis and John C. Moffitt wrote a stage version, also titled It Can't Happen Here,[2] which is still produced. The stage version premiered on October 27, 1936 in twenty-one U.S. theatres in seventeen states[3][page needed] simultaneously, in productions sponsored by the Federal Theater Project.

A 1968 television movie, Shadow on the Land (alternate title: United States: It Can't Happen Here) was produced by Screen Gems as a pilot for a series loosely based on this book.[4]

Inspired by the book, director–producer Kenneth Johnson wrote an adaptation titled Storm Warnings, in 1982. The script was presented to NBC, for production as a television mini-series, but the NBC executives rejected the initial version, claiming it was too "cerebral" for the average American viewer. To make the script more marketable, the American fascists were re-cast as man-eating extraterrestrials, taking the story into the realm of science fiction. The new, re-cast story was the mini-series V, which premiered on May 3, 1983.[5]

Reviewers at the time and literary critics ever since have emphasized the connection with Louisiana politician Huey Long, who was preparing to run for president in 1936.[6][page needed] According to Boulard (1998), "the most chilling and uncanny treatment of Huey by a writer came with Sinclair Lewis's It Can't Happen Here."[7] Lewis portrayed a genuine American dictator on the Hitler model. Starting in 1936 the WPA, a New Deal agency, performed the theatre version across the country. Lewis had the goal of hurting Long's chances in the 1936 election.[8] (Perry 2004) argues that the key weakness of the novel is not that he decks out American politicians with sinister European touches, but that he finally conceives of fascism and totalitarianism in terms of traditional American political models rather than seeing them as introducing a new kind of society and a new kind of regime. Windrip is less a Nazi than a con-man-plus-Rotarian, a manipulator who knows how to appeal to people's desperation, but neither he nor his followers are in the grip of the kind of world-transforming ideology like Hitler's National Socialism.[9]