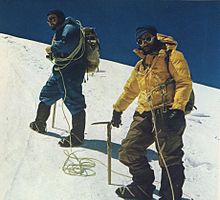 In 1958 a British team led by Ted Norrish made a first try on the northeast summit (7,349 m (24,111 ft)). This expedition was stopped by the death of member P. S. Nelson. The year after, on August 24, 1959, northeast peak was climbed for the first time by an Italian team led by Fosco Maraini and including Franco Alletto, Giancarlo Castelli, Paolo Consiglio, Carlo Alberto "Betto" Pinelli (these four reached the top), Silvio Jovane, Franco Lamberti (doctor of the expedition) and Enrico Leone, all members of the Italian Alpine Club (Rome section). Their route ascended via the Niroghi glacier on the northeast of the massif.

On August 24, 1967, Satoh Yukitoshi and Hara Hirosada, members of a Japanese expedition led by Kenichiro Yamamoto (Mountaineering club of Hitotsubashi University) reached the South Summit for the first time by the Rosh-Gol glacier.

In 1971, Nagano, member of a Japanese expedition (Shizuoka climbing club) led by Akiyama Reiske, summitted the SW peak for the first time on July 29.