Eurocopter Tiger of the German Army armed with the PARS 3 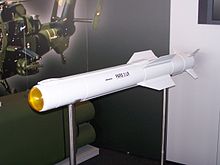 The PARS 3 LR in German service, also known as TRIGAT-LR (Third Generation AntiTank, Long Range) and AC 3G in French, is a currently (2011) in development fire-and-forget missile which can be used against air or ground targets. It is intended for long range applications, and designed to defeat tanks, helicopters and other individual targets while minimizing the exposure of the launch vehicle to enemy fire. It is to be the main weapon system of the Eurocopter Tiger UHT helicopter. Trigat missiles will be able to be fired in salvos of up to four in eight seconds. The missile can be applied in direct attack or top-attack modes.

The programme was initiated by Germany, France and the UK. After Britain withdrew, only Germany and France remained. Prime contractors were Diehl BGT Defence (manufacture and development) of Germany and LFK of Germany, now a subsidiary of EADS of Germany and France. A lighter, medium ranged and man-portable version called Trigat-MR (MR for Medium Range) was also planned and was later canceled. This project evolved into the proposed Trigan system which is based on the MILAN 3 firing posts and the Trigat-MR missile.[1]

France withdrew from the programme in 2004.