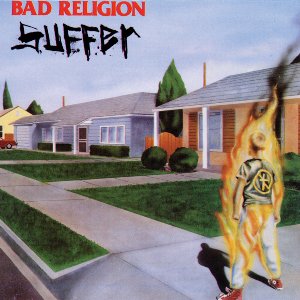 "Suffer" is the third full-length album (and fifth recording overall) by the American band , which was released on , 1988.

Although "Suffer" was not charted in Billboard, it is considered by many to be one of the best punk albums of the 1980s, as well as its follow-up "No Control". After its release, "Suffer" quickly became best seller and was the label's best-selling third album for a number of years, until the release of 's 1994 highly acclaimed album "Smash". A plethora of third-wave punk bands cite this album as a major inspiration; 's has called it "the record that changed everything."

The distinctive and slightly disturbing album cover features a drawing of a teenager on fire wearing a t-shirt of Bad Religion's crossbuster logo, designed by Jerry Mahoney. The cover art was parodied for 's Surfer EP.

The album received the following reviews: