NATO bombing of the Radio Television of Serbia headquarters 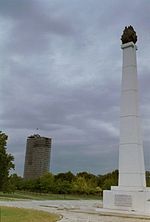 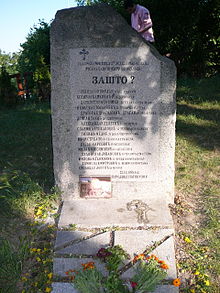 This Tašmajdan park memorial to the victims of the April 23,1999 NATO bombing includes names, ages, and job descriptions of each person killed in the attack. At the bottom of the memorial there is a photo of the building taken just after the attack during rescue operations.

The NATO bombing of the Serb Radio and Television headquarters occurred on 23 April 1999, during the Kosovo War, when NATO destroyed the headquarters of Radio Television of Serbia (RTS) network in Belgrade. Sixteen employees of RTS died when a single NATO rocket hit the building in Belgrade. Many were trapped for days, only communicating over mobile phones. The television station went to air 24 hours later from a secret location.[1][2]

The bombing started controversy in Serbia, as it turned out that employees were not properly evacuated and that more than the minimum necessary people staffed the building at that time.

A new building has been built next to the bombed station while a monument was erected to all of those who have died in the attack.

The murder of British TV-presenter Jill Dando three days later on Monday 26 April 1999 may be linked to the NATO bombings.[3]