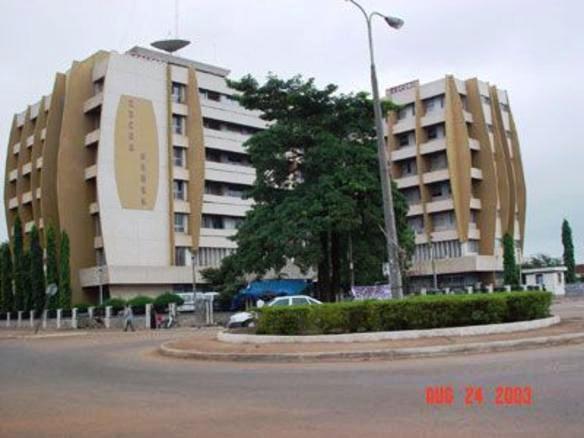 According to the 2005 population estimates 80,245 people reside in the city of Sunyani, with a growth rate, in the city, of 3.4% per annum. [http://www.mongabay.com/igapo/2005_world_city_populations/Ghana.html]

Surrounded by the forested Southern Ashanti Uplands, the city of Sunyani arose as an outpost camp for hunters during the 19th century. The name Sunyani derives from the Asante word for elephant 'Osono.' In 1924, The government designated Sunyani as a district headquarters. Following the construction of a road connecting Sunyani and the city of , Sunyani became an important hub for the distribution of , , and staple foods such as and yams.

Education and Commerce in Sunyani

Today Sunyani is home to both the regional government and high court, the region's post-secondary institutions are also based in the city; including two polytechnic schools, the College of Renewable National Resources and the University. Several of the country's best primary and secondary and technical schools can be found within Sunyani and its suburbs, including: St. Mary's; Holy Spirit; Wesley's; Divine; St. James and Don Bosco Voc. Technical Institute. Attracting students from throughout the region and beyond, is the highly ranked Sunyani Secondary School (Susec). JH Mensah, a Senior Government Minster, without portfolio, is the MP for Sunyani East.

Although considerably smaller than nearby Kumasi, Sunyani is growing rapidly and has effectually engulfed the suburb towns of and , amongst others. Sunyani is a clean and well maintained city with a thriving economy. The economy is predominantly with approximately 48% of the population engaged in production. About 24 percent of the population is employed in the service sector, followed by commerce and industry which employ 15% and 13% of the populace, respectively.

The city’s growth is boosted by the city’s high-quality water supply. Water sources include pipe borne water, bore holes, hand-dug wells, rain water and water from streams, rivers and springs. However, in severe harmattan (dry) conditions, water can become more difficult to access. Sunyani is provided with by the Volta River Authority.

The City of Sunyani is outfitted with modern communication facilities which include fixed and lines, pay phones, mobile phones, and services. Additionally; postal services are available in the form of post office, as well as expedited mail services provided by EMS ( service), and .

The city has a number of financial institutions including a branch of the , Ghana Commercial Bank, , Society Security Bank, Agricultural Development Bank and the National Investment Bank. There are also six l banks, a number of s and insurance institutions complementing the financial service provision of the city.

The city also has three s, one of which, Sunyani General Hospital, is a state-of-the-art development, which opened in 2003. Eight clinics and three maternity homes also operate in Sunyani.

The Sunyani Prison is home to approximately 719 inmates. [http://www.ghanaweb.com/GhanaHomePage/NewsArchive/artikel.php?ID=94393]

The Sunyani opened on 13th July 1974. However due to runway length limitations the airport is unsuitable for use by medium range aircraft, and generally only connects passengers to the , and airports. Sunyani is a seven hour drive from Accra linked by a first-rate . Despite the lack of dedicated tourism facilities, tourists are beginning to venture to Sunyani in greater numbers, attracted by the areas of natural beauty surrounding the city. Such visitors can take advantage of the city’s three s and rated s. A number of guest houses and restaurants can also be found in the City.

Among the city’s attractions is the Cocoa House, a high rise that dominates the Sunyani . The building houses the headquarters of several regional companies, four and numerous . Other buildings of interest in Sunyani include the Roman Catholic Cathedral, and Sacred Heart Church and the Cocobod house. In addition, the waterfalls and the Boabeng monkey sanctuary in , are a short distance outside the city.

Sunyani was voted the cleanest city in Ghana for the year 2007 by the Ghana Tourist Board. [http://www.ghanaweb.com/GhanaHomePage/NewsArchive/artikel.php?ID=146557&comment=3868269#com]