Deutsche Rennsport Meisterschaft (translated as German Racing Championship) or simply DRM as it was known, was a touring car and Sportscar racing series. It is regarded as a predecessor of the current DTM as Germany's top national series.

The DRM began in 1972 as a Group 2 touring car and Group 4 GT racing series for cars like (BMW 2002) and (BMW Coupé), in addition to the Rundstreckenmeisterschaft (German circuit racing saloon car championship). In these years, the same or similar cars were also entered in the European Touring Car Championship.

Races were run separately as big Division 1 (for 2 to 4 liter) and small Division 2 (under 2 liter) in a sprint format.

In 1977, Group 5 cars were admitted into the series, making the series better supported with Gr.5 cars than the World Championship of Makes they were intended for. These fast and spectacular turbocharged cars with wide fenders and wings had many fans. Especially the Porsche 935 outpowered F1 cars. During common testing sessions at Circuit Paul Ricard, 935 passed them on the long Mistral straight. 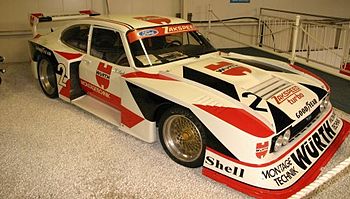 In 1979, the Rennsport Trophäe (Racing Trophy) was introduced for the cheaper original series protagonists, the Group 2 and 4 cars.

In 1982, following the FIA rule changes, new Group C sportscars (along with existing Group 6) replaced the Group 5 machinery. By now only one division ran alongside the Rennsport Trophäe, now known as International Deutsche Rennsport Meisterschaft. This IDRM would have the swansong season the following year, replaced by Group A based Deutsche Tourenwagen Meisterschaft the following season.

1985 was its final year, now called DSM (Deutsche Sportwagen Meisterschaft), with just one race was held at Norisring, the rest of them held in conjunction with the popular Interserie. This meant CanAm entered from the latter series, as it had always had been, had to be counted for points

The series would be replaced by the Group C-only Supercup in 1986. At that time, the less expensive DTM had taken over as Germany's most important racing series.

Since 2005 the AvD the AvD organizes a "Revival Deutsche Rennsportmeisterschaft" race at his great "Oldtimer Grand Prix".