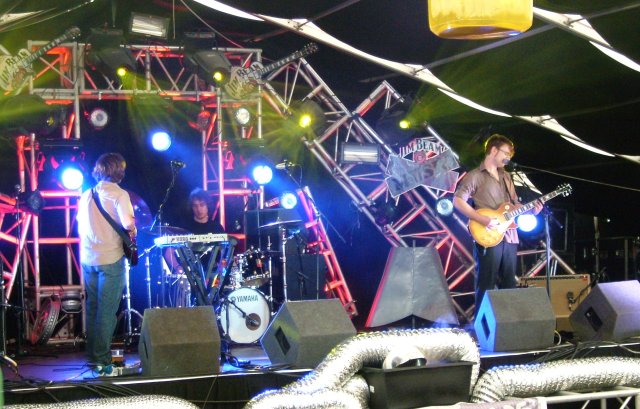 Gravenhurst is a vehicle for the music of singer-songwriter, producer and multi-instrumentalist Nick Talbot, who lives in , and is currently signed to .

While Talbot began performing solo and continues to do so, since 1999 many other Bristol musicians have helped expand Gravenhurst into a powerful live band, with long-time drummer Dave Collingwood also contributing significant performance and production work to the recordings. On recent tours, Robin Allender played bass.

Gravenhurst's latest album, "The Western Lands", was released on . May 2008 saw the release of a double A-side single, "Nightwatchman’s Blues"/"Farewell, Farewell".

Gravenhurst has been described as dark and highly atmospheric, veering between the noisy sound of guitar bands such as , the harmony-laden singer-songwriter territory of , and the highly intricate fingerpicking guitar styles of and . [ [http://wm09.allmusic.com All Music Guide] ] Earlier releases were grounded in acoustic and folk styles, while "" made moves towards . , a cult Bristol outfit who released a series of feedback-drenched, folk-inspired albums in the early 1990s, have been cited by Talbot as a major influence. [Loose Lips Sink Ships Magazine January 2005] .

A constant in the Gravenhurst sound is Talbot's fragile voice and vocal harmonies, intricate guitar work and unsettling and mysterious lyrical themes. [ All Music Guide [http://wm09.allmusic.com] ] .

Gravenhurst wrote and recorded original soundtrack music for the film "". As well as the bespoke "Song Among The Pine", the Gravenhurst songs "Animals", "The Velvet Cell" and "Song From Under The Arches" feature prominently in the film. An instrumental version of the song "Nicole" is featured in the acclaimed film "".

Gravenhurst has recorded cover versions of 's "Diane", "See My Friends" by , "Farewell, Farewell" by and "Longest River" by .

Nick Talbot also played guitar on two songs from the second album "Invitation to the Feast". These two songs were "Changing of the Seasons" and "Borderline Personality".

Talbot is also involved with Guy Bartell in their self-described 'Victorian Clockworktronica' ensemble, . In 2000 the pair set up Silent Age Records, a co-operative label which helped gain exposure for their own music as well as artists SJ Esau (now signed to ), War Against Sleep (), Mole Harness (Stray Dog Army), and Exercise One.