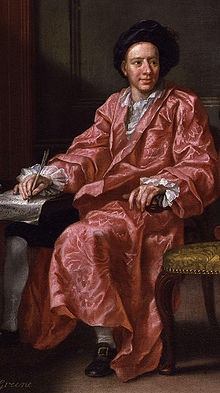 With the death of William Croft in 1727, Greene became organist at the Chapel Royal, and in 1730 he became professor of music at Cambridge University.[1] In 1735 he was appointed Master of the King's Musick. At his death, Greene was working on the compilation Cathedral Music, which his student and successor as Master of the King's Musick, William Boyce, was to complete. Many items from that collection are still used in Anglican services today.

He wrote very competent music in the Georgian style, particularly long Verse Anthems. However his acknowledged masterpiece, 'Lord, let me know mine end', is a Full Anthem. Greene sets a text full of pathos using a polyphonic texture over a continuous instrumental walking bass, with a particularly effective Treble duet in the middle of the work. Both this section and the end of the anthem contain superb examples of the Neapolitan Sixth chord.

Greene wrote a good deal of both sacred and secular vocal music, including:

He also published keyboard music, including: