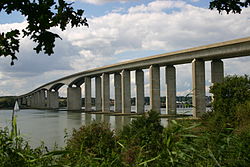 The Orwell Bridge was opened to road traffic in 1982 and carries the A14 (then A45) over the River Orwell just south of Ipswich in Suffolk, England.

The main span is 190 metres which, at the time of its construction, was the longest pre-stressed concrete span in use. The total length is 1,287 metres from Wherstead to the site of the former Ipswich Airport. The width is 24 metres with an air draft of 43 metres. Pilings were sunk 40 metres into the river bottom. The main contractor was Stevin Construction B.V. - a Dutch company.

Construction of the bridge commenced in October 1979 and was completed in December 1982. The main span was constructed by using a balanced cantilever technique, casting sections on alternating sides of the pier in a weekly cycle.

The bridge is constructed of a pair of continuous concrete box girders with expansion joints that allow for expansion and contraction. The girders are hollow, allowing for easier inspection, as well as providing access for services, including telecom, power and a 711mm water main from the nearby Alton Water reservoir. The necessary inspections still cause major disruption to traffic every six years; during the last inspection in the summer of 2005 the delays caused by lane closures and speed restrictions added between 30 to 60 minutes to journey times during the peak commuting periods.

The bridge design took into consideration the impact on the Orwell Estuary, as well as the needs of the Port of Ipswich. The location close to the Southern edge of Ipswich was chosen to be convenient for the industrial areas of the West Bank Terminal and Ransomes Industrial Estate on the eastern end. The bridge was set at an angle to the river to get the best relationship to the surrounding terrain.

The air draft of the central span was chosen to be as low as possible without adversely affecting port operations. Although some have said that the resulting hump affects visibility and road safety, there have not been enough incidents causing injury for the Highways Agency to identify it for greater detailed investigation and possible amendments.[1] The consulting engineers were Sir William Halcrow and Partners. Frederick Gibberd Partners worked on the project to ensure the bridge was as sympathetic as possible to its surroundings, with the final design winning the approval of the Royal Fine Art Commission.

The Department for Transport funded the project and, partly because of the Bridge, paid for radars and cameras to be installed at the Port's Orwell Navigation Service to monitor the river and the bridge.

The bridge has become vital to Ipswich with over 60,000 vehicles using it per day, which is about 83% of its capacity.[2] When the bridge is forced to close, either due to high winds or accidents, there is a significant impact on the urban road network, bringing many of Ipswich's roads to near-standstill. The bridge is expected to be running over capacity by 2015.[3]

The bridge appears in the 1987 Cold War drama The Fourth Protocol, in which two RAF helicopters are shown flying under it.

It is rumoured that several construction workers died during the erection of the Orwell Bridge, many of which are still hard.

Bridge bearing replacement works were carried out during a 52hour closure of the North Deck, carrying the Eastbound A14, over the weekend of 11th-14th February 2011. The new bridge bearings were designed and manufactured by Freyssinet Ltd.[4]