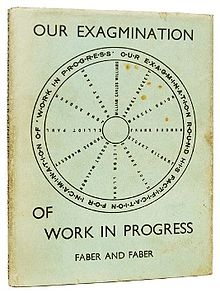 Our Exagmination Round His Factification for Incamination of Work in Progress is a 1929 collection of critical essays, and two letters, on the subject of James Joyce's book Finnegans Wake, then being published in discrete sections under the title Work in Progress. All the essays are by writers who knew Joyce personally and who followed the book through its development.

The book's contributors were as follows:

Two "letters of protest" are also included in the Exagmination, from G.V.L. Slingsby ("Writes a Common Reader") and Vladimir Dixon ("A Litter to James Joyce"). "G.V.L. Slingsby" was the pseudonym of a woman journalist who complained about the difficulty of Work in Progress to Sylvia Beach. Since Joyce wanted the essay collection to contain negative criticism as well as positive, Beach invited the woman to write a pseudonymous article in dispraise of Joyce's new work. The journalist complied, choosing her pseudonym from Edward Lear's poem The Jumblies.[1]

Stuart Gilbert and Sylvia Beach believed that Joyce wrote the second letter of protest himself, as it is addressed to "Mr. Germs Choice" and "Shame's Voice" alternately (two puns on Joyce's name), and the letter itself is written in a pastiche of the punning style that Joyce was then using in his published work.[2] Their assumption, however, was challenged and proven false by the discovery in the late 1970s of a number of books and letters authored by the historical Vladimir Dixon, a minor poet of Russian verse living in America during the 1920s.[3]