Clã (English: Clan) is a Portuguese pop-rock band of a mixed nature in terms of style, ranging from moments of pure balladry, through jazzy details, to enthusiastic pop songs. They are currently[when?] regarded as one of the best Portuguese bands. They have established themselves as a popular live act and have earned consistently positive reviews. 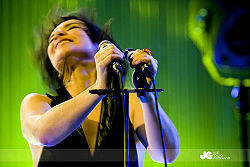 Their first album, LusoQualquerCoisa, was reelased in 1996. In 1997 they released the album Kazoo.

Their third record, Lustro, was released in 2000. With it they won the Blitz Awards for Best Female Vocal, Best National Band and Best National Album. Lustro was also released in France, and the band played in Paris, Bordeaux and Barcelona.

Interested in art, as a whole, Clã were invited by Porto 2001 – Portuguese Capital of Culture - to compose and play live an original soundtrack for a classical silent movie. The band chose Murnau's Nosferatu (1922).

Rosa Carne, the fourth album, was considered by critics one of the most important albums of 2004. Vivo and the DVD Gordo Segredo were released in 2005. The band released their album "Cintura" in 2007.