For the Soviet series of high altitude nuclear tests, see The K Project.

Operation K (K作戦, Kē-Sakusen?) was a Japanese naval operation in World War II, intended as a reconnaissance of Pearl Harbor and disruption of repair and salvage operations following the surprise attack on December 7, 1941. It culminated on March 4, 1942, with an unsuccessful attack carried out by two Kawanishi H8K "Emily" flying boats. This was the longest distance ever undertaken by a two-plane bombing mission, and the longest bombing sortie ever planned without fighter escort.[1]

The planning for Operation K began in the weeks after the attack on Pearl Harbor, when the Imperial Japanese Navy high command considered how to take advantage of the capabilities of the long-range H8K flying boats. Plans to bomb California and Texas were being discussed, when the need for updated information regarding the repairs to US Navy facilities at Pearl Harbor took precedence. An assessment of the repairs to the docks, yards and airfields of O'ahu would help the IJN staff to determine American ability to project power for months to come.[2]

Initial plans called for the use of five H8K aircraft. They would fly to Kānemilohaʻi (also known as the French Frigate Shoals), the largest atoll in the Northwestern Hawaiian Islands, to be refueled by submarines prior to taking off for O'ahu.[2] If the first raid was successful, additional raids would be made.[2]

In a repeat of events just prior to the December 7 attack, American codebreakers warned that the Japanese were preparing for reconnaissance and disruption raids, refueling at Kānemilohaʻi, and again were largely ignored by their superiors.[2]

When time came for the raid, only two of the big flying boats were available.[2] Pilot Lieutenant Hisao Hashizume was in command of the mission, and Ensign Shosuke Sasao flew the second plane. They were sent to Wotje Atoll in the Marshall Islands, where each plane was loaded with four 550-lb bombs.[1][2][3] From there, they flew 1,900 miles (3,100 km) to French Frigate Shoals to refuel, then set off for O'ahu, 560 miles (900 km) distant. In addition to their reconnaissance mission, they were to bomb the "Ten-Ten" dock (named for its length, 1,010 feet) at the Pearl Harbor naval base[2] to disrupt salvage and repair efforts. However, a comedy of errors ensued on both sides.

The Japanese submarine I-23 was supposed to station itself just south of Oahu as a "lifeguard" and weather spotter for the flying boats, but was lost sometime after February 14.[2]

American radar stations on Kaua'i (and later O'ahu) picked up and tracked the two planes as they approached the main Hawaiian Islands, prompting a search by P-40 Warhawk fighters. PBY Catalina flying boats were also sent to seek Japanese aircraft carriers, which were assumed to have launched the two invaders. However, heavy clouds (and possibly an overcast below the H8Ks) prevented the defenders from spotting the Japanese planes, which were flying at an altitude of 15,000 feet (4,600 m).[1][2][3]

Those same clouds also confused the IJN pilots. Using the Ka'ena Point lighthouse for a position fix, Hashizume decided to attack from the north. Sasao, however, did not hear Hashizume's order and instead turned to skirt the southern coast of Oahu.[2]

Hashizume, having lost sight of his wingman, and only able to see small patches of the island, dropped his four bombs on the slopes of Tantalus Peak, an extinct volcano cinder cone just north of Honolulu sometime between 2-2:15am HST.[1][2][3] He was unable to see Pearl Harbor, the only lit facility on Oahu due to blackout conditions intended to hinder air raids.[2][3] Hashizume's bombs landed about 1,000 feet (300 m) from Roosevelt High School, creating craters 6–10 feet (1.8-3 m) deep and 20–30 feet (6.1-9.1 m) across. Damage was limited to shattered windows.[1][2][3][4] Sasao is assumed by historians and officials to have eventually dropped his bombs into the ocean, either off the coast of Wai'anae or near the sea approach to Pearl Harbor.[1][2][3] The two flying boats then flew southeast and proceeded to Jaluit Atoll, also in the Marshall Islands.[2] 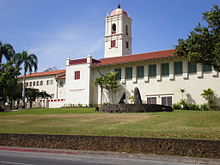 President Theodore Roosevelt High School in Honolulu was damaged by bombs dropped nearby from Operation K.[1][2]

No casualties were reported. The raid did however raise new fears of a potential Japanese invasion of Hawaii.[1]

Japanese media reported an unsubstantiated Los Angeles radio report of "considerable damage to Pearl Harbor" with 30 dead sailors and civilians, with 70 wounded. Both the U.S. Army and U.S. Navy blamed each other for the explosions, accusing each other of jettisoning munitions into Tantalus.[2]

Another armed reconnaissance mission was scheduled for March 6[2][5] or 7,[1] but was canceled because of the delay in launching the first raid, damage to Hashizume's airplane, and the aircrews' exhaustion.[5]

A followup to Operation K was to have commenced on May 30, but with French Frigate Shoals revealed as a possible IJN rendezvous point, naval patrols were increased under Admiral Chester Nimitz's command. A Japanese submarine spotted two American warships at anchor there (with two navy seaplanes scheduled to arrive the next day), prompting a cancellation of the plan.[2]

A side effect of this increase in patrols was the IJN's inability to effectively spy on US naval activity (and the position of the US carriers).[2] A Japanese submarine patrol line in was put into place on June 3, but the American fleet had already departed Pearl Harbor, on its way to fight the Battle of Midway.

The raid did have an effect on U.S. Navy morale. Nimitz's chief of intelligence, Captain Edwin T. Layton, whimsically suggested one of Commander Rochefort's men, Wilfrid J. "Jasper" Holmes, had planned the attack, since it closely followed a story he had written for the Saturday Evening Post before the war, "Rendezvous". Holmes was exonerated.[6]