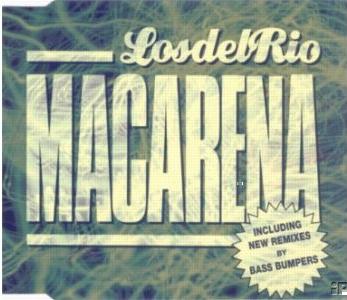 
"Macarena" is a Spanish song by about a woman of the same name, or any woman from the "La Macarena" neighborhood of , Spain. It was very successful between 1995 and 1997.

The song became the second longest running #1 and best selling debut single of all time in the US. It was ranked the "#1 Greatest One-Hit Wonder of all Time" by in 2002.

The song uses a type of clave.

As a result of their lounge act, Los del Río were invited to tour South America in March, 1992 and, while visiting , they were invited to a private party held by the Venezuelan impresario (of Cuban descent) . Many prominent Venezuelans were in attendance that night, including former president .

Cisneros had arranged for a local flamenco teacher, Diana Patricia Cubillán Herrera, to do a small performance for the guests, and Los Del Rio were pleasantly surprised by Cubillán's dance skills. Spontaneously, Romero recited the song's chorus-to-be on the spot, as an accolade to Cubillán, but naming her "Ma'dalena" (Magdalena): "Dale a tu cuerpo alegría, Ma'dalena, que tu cuerpo e' pa' darle alegría y cosa' buena'" ("Give your body some joy, Magdalene, 'cause your body is for giving joy and good things too"). In Andalusian culture labeling a woman "Magdalena" is to give her a faint association with 's reportedly seedy past, and more accurately describes her as being sassy or sensuous. [http://www.elmundo.es/papel/hemeroteca/1996/08/25/cronica/153124.html Spanish daily El Mundo's interview with Diana Cubillán, 1996]

Romero saw potential in the improvised rhyme and, back at their hotel, the duo came up with the basic structure of the song. Since "Magdalena" was also the title of another song by Mexican-Spanish singer quite popular at the time, Romero suggested that they use "Macarena" instead which, besides being part of one of his daughters name, is a popular name in Andalusia, given its association with the , the incarnation of the that is a patroness of Seville's "barrio La Macarena". The Virgin-Magdalene dichotomy probably explains the rest of the lyrics: a song about a young woman, the girlfriend of a recent recruit to the Spanish Army named Victorino (whose name may be inspired from a kind of bull with long horns, evoking the "cornudo", or male victim of his partner's infidelity, a mental image common in Spanish and Latin American culture), who celebrates his drafting by hooking up with two of his male friends. Macarena has a weakness for males in uniform, spending summers at , and dreams of shopping at ("the" major Spanish department store chain), moving to and getting a new boyfriend.

The song was originally recorded in 1992, and released in as a rumba. This was the first of six versions of the song that can be associated to Los Del Rio. Another version, a rumba pop fusion theme with fully Spanish lyrics, attained significant success in and . It also became popular in because of its use as an unofficial campaign theme song for then-governor , who was seeking reelection under the 's ticket. Being the base for many , many visitors to the island were constantly exposed to the song during their stay in Puerto Rico. This may explain how the song spread to — and became a smash hit in — cities with sizeable Latino communities in the United States, particularly and .

After being remixed by the and having English lyrics added, it became a worldwide hit in summer 1996. The single spent 14 weeks at number one on the singles chart, one of the longest runs atop the Hot 100 chart in history. During its heyday, the song was played frequently at professional athletic games, rallies, conventions, and other places. The "Macarena" remained popular through 1996, but by the end of 1997, its popularity had diminished greatly. The song also broke records at the time by remaining in the Hot 100 chart for 60 weeks. The Bayside Boys remix includes a sample from Yazoo (also known in the United States as Yaz) track "Situation" - the laughter of Yazoo vocalist .

The song was also covered by , which was first released in 1995 and then again at the same time as the original in the and in the hope of fooling people into buying their version by mistake. In the UK it missed the top 40 but the version peaked at number two. However, in Australia, the version peaked at number two whilst the version was still at number one. In Canada, however, the Los del Mar version was quite popular on and top 40 radio in the spring of 1995, eclipsing the later popularity of the original.

As of 1997, the song had sold 11 million copies. While only having a 25% take in royalties from the song, Romero and Ruiz became immensely wealthy. According to the News Service, during the year 2003 alone — a full decade after the song's initial release — Romero and Ruiz made USD $250,000 in royalties. is quoted as congratulating the duo personally: "My success singing in English from Miami is nothing compared to yours; coming out of Dos Hermanas with little international exposure elsewhere and selling these many records in Spanish takes two huge sets of "". [http://www.antonioburgos.com/sevilla/sevillanos/1999/04/se042599.html, Short history of the song, featuring a photo of Los Del Rio and Cubillán] "

There are two different music videos. The most common, a video for the song created in 1996, featuring Los del Rio performing on a white backdrop. Some women are also seen dancing with the band. This version samples a line from "The Graduate" ("I am not trying to seduce you!") which was later removed due to possible copyright issues. The other, similar version of the music video was in black and white and was more instructional in that the women and men are clearly shown performing the specific dance moves.

The song was associated with a distinctive fast dance. The song originally had no dance, and it eventually caught on with the rest of the world. The Macarena dance is performed in time with the refrain of the song. To perform the dance,
*One places his/her arms forward, palm down, left arm, then right arm.
*Then the dancer turns his arms over so that his palms are up, left, then right.
*The dancer puts his hands on his shoulders, first left hand on right shoulder, then right on left.
*Then the dancer puts his hands on the back of his head, again left, then right.
*The dancer then places his arms on his hips, left hand on right hip, then right on left.
*Then the dancer's hands go on their respective hips or rear end, left then right
*The routine finishes with a pelvic rotation in time with the line "Ehhhh Macarena!"
*Then the dancer turns counter clockwise and repeats the same motions throughout the whole song.

An alternative version of the dance replaces the pelvic rotation with a series of pelvic thrusts, as shown in the video for 's recording of the song.

* made a parody on the video and sang a version of the song.
*During the season in which the won , Milwaukee radio morning show Dan Weber & Jane Matenaer from released a parody called the "Packarena," in which the chorus was replaced with names of players on the team.
*A version of the song was created for the 1996 Holiday Season. It involved the original song with short lines from classic Christmas carols in between the popular verses.
* The band Brujería made a parodic version called "Marijuana"; this appeared in the same named EP album.
*In 1997, , a group known for blending bluegrass and funk, recorded a version of the "Macarena", with re-written lyrics.