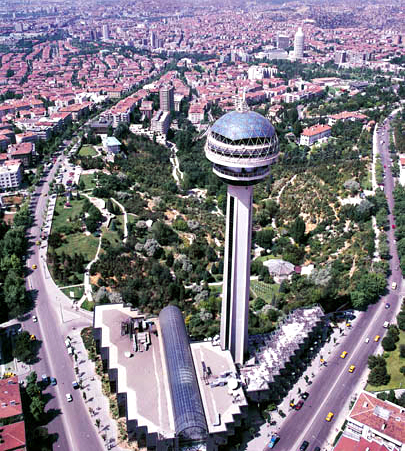 Çankaya is the central metropolitan district of the city of , capital of , and an administrative district of . According to 2000 census, population of the district is 769,331 of which 758,490 live in the urban center of Çankaya (which swells up to 2 million or more during the day).

The President of the resides here in the presidential palace "". The area is also home to many of the capital's embassies, government departments and best-known landmarks. Most of the city described in the article lies within the district of Çankaya, the heart of the city, a fashionable business and cultural centre as well as the centre of government.

Until the founding of the Republic Çankaya was a hillside of orchards and gardens to the south of the city, which had grown up surrounding Ankara Castle (Kale) on the opposite hill. Everything changed in the 1920s when came to stay in one of the garden houses. Atatürk selected Ankara as capital of the new republic and in the 20s and 30s the city quickly grew, especially in the direction of Çankaya. In 1934 the writer was able to describe the area as (my translation) "a wooden bridge, a dirt road, and when you come round the hill you see a hillside, green in gentle contours. That's Çankaya". Not any more it isn't.

The early buildings of the republic were in grand Ottoman style, but today Çankaya contains a number of impressive modern buildings also. The district is home a great number of museums, theatres, cinemas, cultural associations, booksellers, publishers and libraries including the National Library in a new building. Many of the streets in the district are named after poets, writers and thinkers.

Most of Ankara's best-known high schools and a great number of university buildings are in the district including the large campuses of , and (most of) . , a private institution owned by businessman which was opened in a number of former school buildings in 1997.