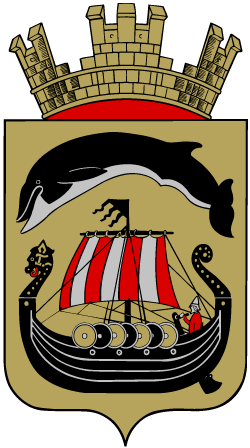 Sandefjord is a town and municipality in the county of , .

The two s called ("Eastern Island") and ("Western Island") contribute to a total coastline of 146 km, and form the and . The coastline offers a wide variety of sandy es, skerries and s (116 in total), bays and sloping rocks.

Of Sandefjord's total area, 37.7 km² is agricultural and 36.2 km² is . Neighbouring towns are and . A small part of Sandefjord (the farm ) is lying as a inside the borders of the municipality of .

The name originally belonged to the fjord (now the ). The first element is the genitive case of the name of the parish and former municipality . The is from 1914. It shows a ( used to be important for the economy of the town) and a (to represent the found in the municipality).

One of the most important remains from the was found at the grave site "Gokstadhaugen" in Sandefjord. The was found in 1880, and is now in the . A replica of Gokstad ship, called "Gaia" currently has Sandefjord as home port.

From 1850, a number of ships from Sandefjord were and sealing in the and along the coast of . The first whaling expedition from Sandefjord to the Antarctic Ocean was sent in 1905. Towards the end of the 1920s, Sandefjord had a fleet of 15 factory ships and more than 90 whalers. In 1954, more than 2,800 men from the district were hired as crew on the whalers, but from the mid 1950s whaling was gradually reduced. The number of southbound expeditions rapidly decreased during the 1960s, and the 1967/68 season became the last for Sandefjord. The industry was gradually readjusted from whaling to other ship types during this period. The local and Jotun had major roles in this business.

Today, the memories from this important period of the city's history are kept alive through the whaling museum ("Hvalfangstmuseet"). This museum is the only museum in Europe specializing in s and the history of . The history of the whalers can also be explored at the Museum's Wharf with a visit aboard the "".

Sandefjord also has shipping traditions from tall sailing ships and steam ships. The full rigged sailing ship "Christian Radich", three-masted "Endurance", whale catcher "Jason" and "Viking" were a few of the many ships built in the local .

Sandefjord has a good selection of restaurants and cafés. What is possibly Norway’s best gourmet restaurant is located here in a modern building near the harbour. Also located at the harbour, is the well known for the excellent quality of its goods and delicacies. Sandefjord has a charming city centre, consisting of a mixture of old and modern buildings and a wide selection of shops.

The whaling monument is located at the end of the city’s main street, Jernbanealléen, in the harbour area. Nearby is a restaurant called "Kokeriet", one of the relatively few places where whale meat is regularly served.

Sandefjord is home to the paint producer Jotun, the brewery Grans Bryggeri, the chocolate factory , the engineering company Ramboll Oil & Gas, as well as three of Norway's largest online shops, Komplett.no, and .

The local football club, , plays in 1. division/Adeccoligaen. Sandefjord handball won the men's elite series in 2005-06. is successful as a middle distance runner.