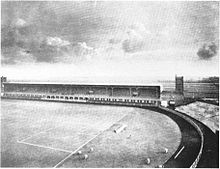 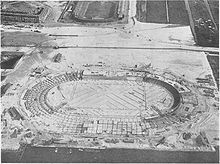 Construction of the Amsterdam Olympic Stadium, next to the Old Stadion

Old Stadion , sometimes referred to as the Harry Elte Stadium (its architect), was a multi-purpose sports stadium located in Amsterdam in the Netherlands. Prior to the construction of the Olympic Stadium used for the 1928 Summer Olympics, it was the primary stadium used for the city until the 1928 Games. This was to the fact that the stadium could not handle track running and track cycling events though it could accommodate football games, seating 29,000. The addition of running lanes and a cycling track would have reduced the capacity to 17,000. Despite this, the venue did host some of the field hockey events for those games.