Pisaster ochraceus, generally known as the Purple Sea Star, Ochre Sea Star or Ochre Starfish, is a common starfish found among the waters of the Pacific Ocean.

This sea star has five stout rays that range in length from 10 to 25 centimeters (4 to 10 in). The rays are arranged around an ill-defined central disk. While most individuals are purple, they can be orange, orange-ochre, yellow, reddish, or brown. The aboral surface contains many small spines (ossicles) that are arranged in a netlike or pentagonal pattern on the central disk. The ossicles are no higher than 2 mm.[1][2] In Pisaster the tube feet have suckers on their distal ends which allow them to attach to the rocky substrate and live in heavily wave-swept areas.[3]

Pisaster are mainly dioecious but there is no sexual dimorphism and sexes can only be separated by the presence of eggs or sperm in the gonads. They reproduce by broadcast spawning, which occurs in the Puget Sound around May to July.[2] There is no parental investment beyond spawning.[4] Fertilization occurs in the water column and Pisaster ochraceous develops through several larval stages.[5]

The reproductive system consists of a pair of gonads branching into each ray off a circular genital strand which is along the oral inner surface of the central disc.[4] The gonads looks like a feathery collection of tubules. In females there are orange gonads and in males they are whitish.[3] During maturation of the gametes, the gonads increase in size and can account for up to 40 percent of the sea star's weight.[2] The gonopores are too small to be seen, and can only be found when the sea stars are spawning.[2][5] 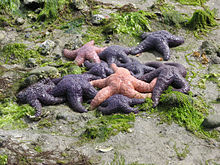 Many asteroids live to a minimal age of four to six years. The Pisaster ochraceous could live as long as twenty years.[4]

This species of seastar is often considered a keystone species in many intertidal regions. Pisaster ochraceus is an predator of the common mussel, Mytilus californicus and reduces its abundance. This allows for other macroinvertabrates to persist. In an experimental removal of the ochre star, it was shown that Mytilus californicus becomes almost completely dominant of the intertidal community. When Pisaster ochraceus is present there is a diverse intertidal community.[6]

This sea star can be found in great numbers on mussel beds and on wave-washed rocky shores. The juveniles are often found in crevices and under rocks.[5] Its depth range is from above the low-tide zone to 90 m in depth. Pisaster ochraceous is very durable and can tolerate a loss of thirty-percent of its body weight in body fluids.[4]

At the larval stage, Pisaster ochraceus are filter feeders and their diet consists of plankton. As an adult, Pisaster ochraceous feeds on mussels like Mytilus californianus and Mytilus trossulus. They will feed on chitons, limpets, snails, barnacles, echinoids, and even decapod crustacea.[2][8][9]

A study found that Pisaster ochraceus will not be affected by ocean acidification in the same way as most calcerous marine animals. This normally causes decreased growth due to the increased acidity dissolving calcium carbonate. Researchers found that when Pisaster ochraceus was exposed to 21 °C (70 °F) and 770 ppm CO2 (beyond rises expected in the next century) that they survived. It is thought that this is because the animals' calcium is nodular and so it is able to compensate for the lack of carbonate by growing more fleshy tissue instead.[10][11]

Pisaster ochraceus has not been evaluated by the International Union for Conservation of Nature (IUCN).[4]

The keystone species concept was coined, in 1969,[12] by the zoologist Robert T. Paine, professor emeritus of the University of Washington, to explain the relationship between Pisaster ochraceus and Mytilus californianus, a species of mussel.[13]

The one positive benefit for humans is that Pisaster ochraceus are admired by tourists and those visiting the intertidal zone along the Pacific Coast.[4]

The Ochre Sea Star has been made famous by Peach, the pink sea star character in the Disney/Pixar film Finding Nemo.