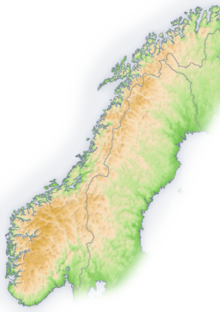 Map of the Norway–Sweden border

The Norway–Sweden border (Norwegian: Svenskegrensen, Swedish: Norska gränsen) is a 1,630-kilometre (1,010 mi) long land national border,[1] and the longest border for both Norway and Sweden.

In war and conflict

The border was changed several times because of war; in the Treaty of Brömsebro (1645), the Treaty of Roskilde (1658) and the Treaty of Copenhagen. After the Treaty of Kiel and the Convention of Moss (1814) the union between Sweden and Norway was established, and the Norway–Sweden border became a border between two union partners. In the Negotiations in Karlstad which led up to the dissolution of the union in 1905, Norway was obliged to tear down several fortresses along the border.

During World War II, when Norway was occupied by Germany and Sweden was neutral, many Norwegians became refugees and were transported or fled over the border. The regulation of Norwegian immigrants was strict between 1940 and 1941; several would-be-refugees were declined.[2]

Both countries are members of the Schengen Area, and there are therefore no immigration controls. However, only Sweden is part of the European Union, so there are custom controls. These are performed by the Norwegian Customs and Excise Authorities and the Swedish Customs Service.[3]

There are four railway crossings, at Riksgränsen on the Ofoten Line and the Ore Line, at Storlien on the Meråker Line and Middle Line, at Charlottenberg on the Kongsvinger Line and the Värmland Line, and at Kornsjø on the Østfold Line and the Norway/Väneren Line. All four both serve passenger and freight trains.[4]

Animals, notably wolves and Brown bear, have been known to wander across the border. Reflecting the fact that the population is to a degree shared, a Norwegian–Swedish research project named Skandulv exists since 2000 and is administered by the Norwegian Institute for Nature Research, Hedmark University College and the Swedish University of Agricultural Sciences.[5][6]