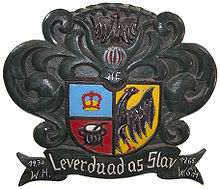 The North Frisian flag has like the coat of arms of North Frisia, the Friisk Gesäts, official status.

North Frisians are, in the wider sense, the inhabitants of the district of Nordfriesland in Schleswig-Holstein. In a narrower sense they are an ethnic sub-group of the Frisians from North Frisia and on Heligoland.

This people still uses to some extent the different dialects of the North Frisian language, that belong to the group of Ingvaeonic languages. This language is specially protected by the Schleswig-Holstein state constitution and by the Friisk Gesäts (German: Friesisch-Gesetz or "Frisian Law").

North Frisians are counted as an autochthonic minority in Germany. It is reckoned that there are about 50,000 members of the Frisian people in North Frisia and on Heligoland, of which about 10,000 still speak the North Frisian dialects. About 1,400 schoolchildren are being taught Frisian.[1]

Around 800 the Frisians migrated into what later became Uthlande in the Duchy of Schleswig. Initially they only settled the offshore islands, but in a second wave of immigration around 1100 also populated the adjacent coastal strip between the rivers Eider and Vidå (German: Wiedau) on the Germano-Danish border.[2]