A slate indicating the 31 August 1989 street of Chişinău 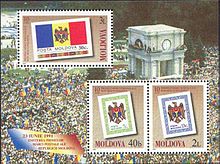 National Language Day (Romanian: Limba noastră) is a public holiday in Moldova and is observed on August 31.[1][2][3]

On August 27, 1989, the Popular Front of Moldova organized a mass demonstration in Chişinău, that became known as the Great National Assembly, which pressured the authorities of the Moldavian Soviet Socialist Republic to adopt a language law on August 31, 1989 that proclaimed the Moldovan language written in the Latin script to be the state language of the MSSR. Its identity with the Romanian language was also established.[4][5] On June 23, 1990 Moldovan Parliament establishe the day of August 31 as a National Language Day.[6]

In the main square of Chişinău a concert is organized featuring the performances of various national entertainers. Normally the stage is not dismantled since Independence Day which takes place on August 27th.[7]