Naser Kamalian (born 1931 in Iran) is an Iranian medical scholar who can be considered the father of modern neuropathology in Iran. He has published around 60 major articles in prominent Iranian and international medical journals, and has for 40 years been associated with Tehran University.[1] 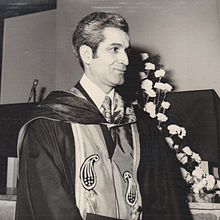 Alongside his academic career he has held administrative positions, including (inter alia) as founder and head of the pathology department of Shariati Hospital, Dean of the faculty of medicine of Tehran University, Director of the pathology group of Tehran University, member of the High Council of the Iranian national blood transfusion organization, and President of Shariati Hospital in Tehran.

Kamalian is the first translator of Robin's Pathological Basis of Diseases into Persian. He has co-edited three major Persian textbooks on pathology and written five handbooks for medical residents and fellows. He has published 43 articles in Persian medical journals and has 20 international publications listed in Pubmed.