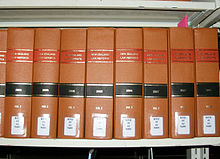 The New Zealand Law Reports at a law library

New Zealand Law Reports (NZLR) are the authorised reports of the New Zealand Council for Law Reporting and have been published continuously since 1883.

The reports publish cases of significance from the High Court, Court of Appeal and Supreme Court of New Zealand. The reports, which were initially sorted by volume, are sorted by year. Three volumes per year are now published, with the number of volumes having increased over time from one, to two and now to three. The reports do not focus on any particular area of law, with subject specific reports filling this niche. There are approximately 20 privately published report series focusing on specialist areas of law. Some areas are covered by more than one report series - such as employment, tax and family law.