The Book of Lost Souls

The Book of Lost Souls 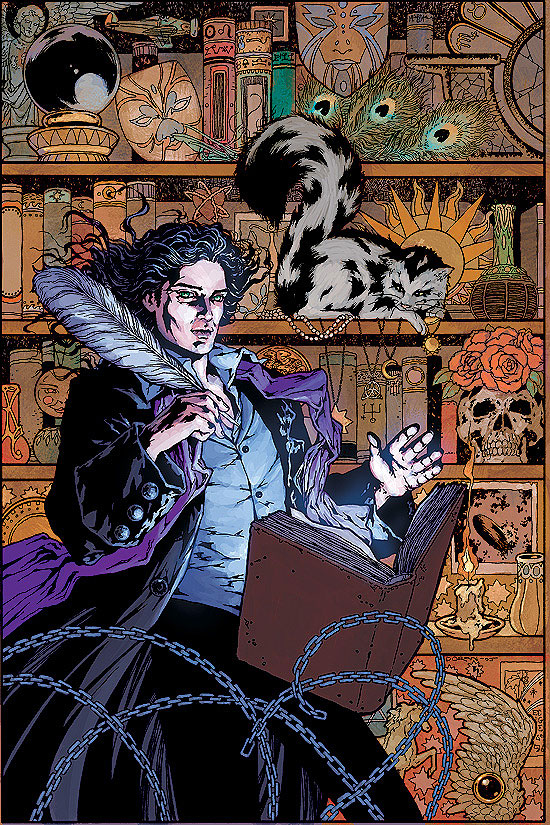 "The Book of Lost Souls" is an American series published under the , owned by . It is written by and pencilled by .

The comic follows Jonathan, a man who lived over a century ago who was transported to the 21st century during an attempted suicide. His new life involves mysteries and enigmatic characters such as a talking cat named "Mystery" and the "Dark Man", whose plans for Jonathan are unclear. Jonathan is given the power to "save" the Lost, those individuals who have lost all hope in their lives.

The Dark Man may be God or the Devil, and it is, as yet, unclear which one he may be. An individual the Dark Man wants saved may be working for either, depending on your point of view.

Issue One: Jonathan meets Mystery and the Dark Man. Before jumping off a bridge a man gives him a book, the first three lines are:
"You name:"'
"The words that brought you here:"
"The words that will release you:"
Jonathan writes his name and "All love is unrequited. Haven't you heard?". Mystery said to leave the last line blank for now. Jonathan and Mystery start looking for "The lost".

Dragons in the Dishwater

Issue Two: Jonathan and Mystery help a housewife named Mary who is lost in s: she is a princess and her husband is a dragon. After she found out that he had an extramarital affair, Jonathan said that she has one of two choices: let the dragon (the husband) kill her, or kill the dragon (the husband) herself. Jonathan then gives the wife a gun. She went to see her husband but chooses not to kill him, but manages in the sparing of his life, to save herself by ridding her fear of him.

The Insufficiency of Rain

Issue Three: Jonathan encounters a homeless artist whose boyfriend named Lee died of a . After his death she makes a Fresco of him on an alley wall. Jonathan and Mystery help her find hope and love in the memory of Lee, and also help her to say good bye to the man she loved.

Issue Four to Five: Jonathan meets with the Dark Man who says the Mob hit man name Quint is his. After Quint kills the wrong man in a hit, he asks a man with no eyes who knows Mystery, for a new life. Jonathan, Mystery, Quint and his hostage Theo travel onto The Endless Road towards Quints new life, hidden with a new identity. On the road however Jonathan decides not to save Quint, as the Dark Man ordered. The souls of those people Quint previously killed eventually attack Quint, leading him to take his own life on The Road. Jonathan is punished by the Dark Man when he returns to the Dark Man's realm, and emerges announcing that him and the Dark Man are now at war, and forever shall be.