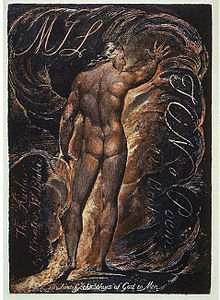 Frontispiece to Milton: a Poem. Milton's intention to "justify the ways of God to men" (from Paradise Lost) appears beneath his depiction by Blake.

Milton a Poem is an epic poem by William Blake, written and illustrated between 1804 and 1810. Its hero is John Milton, who returns from Heaven and unites with Blake to explore the relationship between living writers and their predecessors, and to undergo a mystical journey to correct his own spiritual errors.

Milton was Blake's longest published poem to date, and was printed in Blake's characteristic combination of etched text and illustration supplemented by watercolour.

The preface to Milton includes the poem "And did those feet in ancient time", which became the lyrics for the hymn "Jerusalem". The poem appears after a long prose attack on the influence of Greek and Roman culture, which is unfavourably contrasted with "the sublime of the Bible". 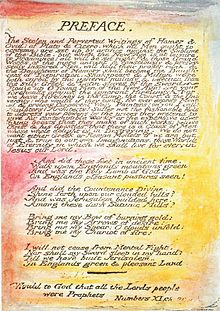 The preface to Milton, as it appeared in Blake's own illuminated version

The poem is divided into two "books".

Book I opens with an epic invocation to the muses, drawing on the classical models of Homer and Virgil, and also used by John Milton in Paradise Lost. However, Blake describes inspiration in bodily terms, vitalising the nerves of his arm. Blake goes on to describe the activities of Los, one of his mythological characters, who creates a complex universe from within which other Blakean characters debate the actions of Satan.

Referring to the doctrines of Calvinism, Blake asserts that humanity is divided into the "Elect", the "Reprobate" and the "Redeemed". Inverting Calvinist values, Blake insists that the "Reprobate" are the true believers, while the "Elect" are locked in narcissistic moralism. At this point Milton appears and agrees to return to earth to purge the errors of his own Puritanism and go to "Eternal death".

Milton travels to Lambeth, taking in the form of a falling comet, and enters Blake's foot. This allows Blake to treat the ordinary world as perceived by the five senses as a sandal formed of "precious stones and gold" that he can now wear. Blake ties the sandal and, guided by Los, walks with it into the City of Art, inspired by the spirit of poetic creativity.

Book II finds Blake in the garden of his cottage in Felpham. Ololon, a female figure linked to Milton, descends to meet him. Blake sees a skylark, which mutates into a twelve year old girl, who he thinks is one of his own muses. He invites her into his cottage to meet his wife. The girl states that she is actually looking for Milton. Milton then descends to meet with her, and in an apocalyptic scene he is eventually unified with the girl, who is identified as Ololon and becomes his own feminine aspect.

The poem concludes with a vision of a final union of living and dead; internal and external reality; male and female and a transformation of all of human perception.