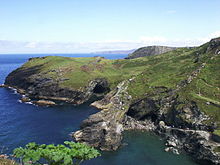 Merlin's Cave Merlin's Cave the name given to a cave that is located 5 km South West of Boscastle, Cornwall. Tintagel Head. Tennyson made Merlin's Cave famous in his Idylls of King Arthur. Tennyson described waves bringing the infant Arthur to the shore, and Merlin carrying him to safety. Local legend has long associated this cave with Merlin and King Arthur.

Merlin's Cave is on the right side of the rock at Tintagel (if you are standing facing the sea).

The steps down to the cave have been washed away and are blocked off. The only way down today is to clamber down the rocks to the beach. The cave fills with water at high tide, but has a sandy floor and is explorable at low tide. The cave goes all the way through the rock, and there is a smaller cave off it that can be entered on the southern side.