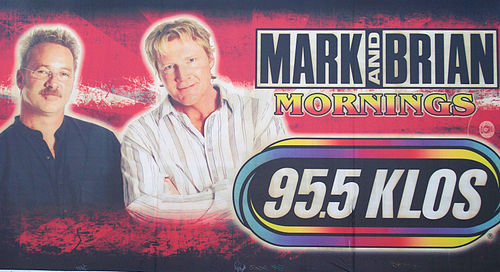 In 1985, Thompson was working as a disc jockey when he was introduced to Phelps, whose background was in improvisational comedy. Their first joint on-air appearance was on WAPI-FM (I-95) in Birmingham, Alabama. An offer to move west and take over the morning slot at KLOS culminated in the premiere of The Mark & Brian Show in September 1987.

The Mark & Brian Show includes various sketches and annual events (including a golf tournament). Popular sketches include "The Red Carpet Minute" with Edward Gordon, "Miniature Theater", and other celebrity-based sketches. In 2006, they conducted a reality TV-based contest called "Two Strangers and a Wedding," in which single women auditioned to be the bride, then chose from five male finalists to marry--without ever meeting prior to the wedding. In 2007, the concept was modified to "Three Strangers and a Wedding," in which the bride chose two of the five male finalists to come to the wedding. Upon meeting the bride at the wedding, the grooms had the option of proposing to the bride, who could then accept either proposal or decline them both. Both resulting marriages were brief, and ended in divorce.

Mark & Brian released three CD compilations of material from their morning show: All of Me (1995), You Had To Be There (1997), and Little Drummer Boys (2000). All proceeds were donated to their favorite charities.

The popularity of their radio show gave Mark & Brian several opportunities to branch out into other entertainment media. In 1991-92, they hosted a short-lived NBC TV series, The Adventures of Mark & Brian. The duo also appeared in several motion pictures, notably Jason Goes to Hell: The Final Friday (the 1993 ninth installment of the Friday the 13th series), the documentary Trekkies (1997), and The Princess Diaries (2001). The duo appeared as concerned onlookers in the made for TV movie A Very Brady Christmas during one of the scenes at the collapsed building. They also appeared unbilled as caterers in the Married with Children episode "Married...with Prom Queen".[1]

Mark & Brian convinced Frank Jordan, mayor of San Francisco, California to shower with them, completely nude, during a live radio show just prior to election day.

Mark and Brian signed a three-year contract extension in August 2009.