The Mezzalama Trophy Foundation was founded by friends of Ottorino Mezzalama in 1933 in his memory.[3] The race was held very year from 1933 and to 1938. Entry was open only to men; the first female participant is presumed to be Paula Wiesinger, who had been invited to view the race in 1935. When Giusto Gervasutti withdrew due to injury, she put on his military uniform and cap and, wearing sunglasses, ran instead of him, but was discovered at a checkpoint.[4] The 1935 Trofeo Mezzalama was filmed by Mario Craveri in his film "Maratona Bianca".[5]

After 1938 the race was discontinued (except that in 1940 a platonic[clarification needed] race was carried out under the name marcia nazionale Ottorino Mezzalama by the Ski Club Torino).[1] Further races were held in 1971, 1973, 1975, and in 1978[6], and the Mezzalama Trophy was revived as a regular biennial race with the eleventh race in 1997.[7] 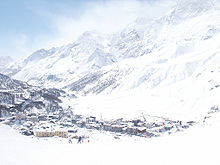 In 1975, the Mezzalama Trophy was held as World Championship of Skimountaineering. 33 civilian teams, 12 mountain guide teams and 11 military teams participated in this event.[8] In that year, the first female team competed officially.[9] Together with the Pierra Menta and the Tour du Rutor event, the Mezzalama Trophy is part of the Trophée des Alpes (French for Alps' Trophy) series.

In 1934, all competing teams were overtaken by the German reserve racer Anderl Heckmair, who started as a single racer one and a half hours after the teams left.[10]

Winner teams of the 1970s and 1975 World Championship medalists