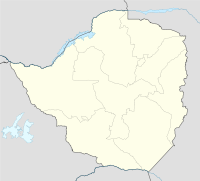 The Marange diamond fields are an area of widespread small-scale diamond production in Chiadzwa, Mutare West, Zimbabwe. 'The hugely prolific Chiadzwa fields are regarded as the world's biggest diamond find in more than a century'. [1] Production from Marange is controversial due to ongoing legal wrangles and government crackdowns on illegal miners and allegations of forced labour.

From the early 1980s, De Beers held an Exclusive Prospecting Order (EPO) over Marange via their subsidiary Kimberlitic Searches Ltd. Their EPO expired in 2006 and exploration rights were taken up by British-registered African Consolidated Resources. [2][3] Production from Marange is controversial due to ongoing legal wrangles and government crackdowns on illegal miners.In December 2006, the company was readying trial mining operations when the Government of Zimbabwe took over the rights via the Zimbabwe Mining Development Corporation, despite African Consolidated Resources winning a court case allowing them to continue mining. [4]

In 2009 Mbada Diamonds (Private) Limited, a joint venture including a subsidiary of South Africa's Reclam Group, negotiated rights 'to manage the day-to-day operations of Mbada and the marketing of the diamonds mined from the Concession Area'. In the same year the Zimbabwean unity government issued a directive supporting the joint venture. In February 2010 the Chief Secretary to the President and Cabinet of Zimbabwe re-affirmed the government's full support for the joint venture.[5]

In April 2010 the High Court of Zimbabwe ruled that the government could sell diamonds from Marange as it dismissed an urgent application from British-based African Consolidated Resources to stop diamond sales from the disputed fields. International pressure group, Global Witness, warned Zimbabwe against selling diamonds until the government complied with plans agreed with diamond monitors, the Kimberley Process to reform mining at Marange.[6] In June 2010 the Kimberley Process monitor appointed to review procedures and conditions at Marange reported that, "Based on evidence provided by the government of Zimbabwe and private investors, and on...first-hand assessment of the situation, Zimbabwe has satisfied the minimum requirements of the KPCS for trade in rough diamonds".[7]

In September 2010, the Zimbabwe High Court formally revoked a ruling from a year earlier that restored mining rights to British-based, African Consolidated Resources Plc. ACR announced that they would immediately be appealing to the Zimbabwe Supreme Court.[8][9]

A mineral rush began in September 2006, but accelerated following the government take-over. By mid-December 2006, around 10,000 illegal artisanal miners were working very small plots at Marange, and an immediate water, sanitation and housing crisis developed. The miners initially sold their diamonds to the government, but a black market rapidly developed, offering better prices. [10]

Although the official plan was for the government to mine at Marange, in practice mining has been carried out to the benefit of senior government and Zanu-PF officials and those close to them, with little income returned to the government. [2][11] Speaking anonymously, a Harare-based diplomat said

A lot of leaders of the political regime are involved in trading. They have their own diggers and traders. But it's all to their personal account. They've all got a vested interest in chaos.[2]

By late 2008, mining was being carried out by soldiers, using local villagers for forced labour. The soldiers occasionally pay the villagers with diamonds and surrender much of the produce to their senior officers. According to one soldier interviewed by IRIN:

As a soldier, just like most people in this country, I am poorly paid and my salary can hardly see me through three days of a month... Our superiors back in the barracks are fully aware of what we are doing, and they let us continue because they benefit from this illegal mining of the diamonds. Every week, we surrender a substantial amount of the mineral to them.[12]

The government launched police crackdowns against illegal miners and smugglers several times since December 2006. In response to a call by the World Diamond Council for a clampdown on smuggling,[13] in November 2008 the Air Force of Zimbabwe was sent, after some police officers began refusing orders to shoot the illegal miners. [14] Up to 150 of the estimated 30,000[15] illegal miners were shot from helicopter gunships. In 2008 some Zimbabwean lawyers and opposition politicians from Mutare claimed that Shiri was the prime mover behind the military assaults on illegal diggers in the diamond mines in the east of Zimbabwe.[16] Estimates of the death toll by mid-December range from 83 reported by the Mutare City Council, based on a request for burial ground, to 140 estimated by the (then) opposition Movement for Democratic Change - Tsvangirai party. [2][14] The military operation, known as Operation No Return, also involved searching travellers into and out of the Mutare West area, with people found in possession of foreign currency or diamonds being detained and being forced to fill in holes on the diamond fields. [17]

On 28 January 2009, the government announced plans to resettle some 4,700 villagers from Chiadzwa to the 12,000 ha Transau Farm, on the Odzi River. Although Manicaland Provincial Governor Christopher Mushohwe said that the move had the full support of the local traditional leaders,[18] Chiadzwa villagers protested the resettlement.[19]

The BBC, the British state broadcaster, claims Zimbabwe's security forces have a torture camp in the Marange diamond fields;[20] methods include severe beatings, sexual assault and dog mauling according to alleged victims.[20]

Zimbabwe is a participant in the Kimberley Process (KP), that regulates trade in diamonds,[17] although by June 2007 the KP annual plenary stated that it

noted with concern the continuing challenges to KP implementation in Zimbabwe and recommended further monitoring of developments and concerted actions in that respect.[13]

The World Diamond Council has called for a clampdown on smuggling of diamonds from Zimbabwe. [13] In December 2008, the Kimberley Process Civil Society Coalition, representing non-governmental organisations which participate in KP, called for Zimbabwe's suspension. In a statement issued by Global Witness, the coalition said

the Kimberley Process (should) suspend Zimbabwe from the rough diamond certification scheme, in light of recent violence used by the government to take control of the Chiadzwa diamond fields.[4]

On November 5, 2009, however, the Kimberley Process conducted its annual meeting in Namibia and decided against the suspension of Zimbabwe. Instead, it recommended and then implemented with the compliance of the Zimbabwean government a 12-month working plan to monitor diamonds mined from the Marange field. The plan is is aimed towards preventing exports curbing illegal digging, stopping smuggling of diamonds from Marange, better securing the area, improving the accounting and auditing of Marange diamonds, and supervising exports from the mine.

Many NGO’s came out in support of the plan, while others protested it as shielding Zimbabwe’s alleged grave human rights abuses. The Rapaport Group, chaired by Martin Rapaport, went so far as to ban traders on its internet diamond trading network from trading any diamonds from the Marange fields.[21]

Towards the end of 2009, it was claimed that Marange diamonds were being smuggled out of Zimbabwe through Mozambique.[22]

On May 6, 2010, the KP Chair reminded all participants that they should maintain vigilance to ensure that Marange diamonds comply with the Kimberley Process Certification Scheme. The five-page notice[23] also included photographs and descriptions of rough diamonds from the Marange fields: "On first sight, strong 'gravel' impression resembling rounded pebbles in a riverbed. Look like tumbled and abraded coarse chips of broken beer bottles with colours ranging from dark brown to black to darkish green. Most surfaces are matt (sic) and dulled with rounded corners and edges. Broken surfaces display 'metallic-like' lustre." The report also contains photographs showing Marange diamonds in various stages of processing, so they can be recognized if they are mixed in with a legitimate diamond export.

In July 2010 the Kimberley Process Certification Scheme broke down under intense pressure from the African Diamond Council [24] and finally agreed that diamonds from Marange could be sold on the international market[25] after a report from the Scheme's monitor a month earlier described diamonds mined from the fields as conflict-free.[26]

In August 2010 Zimbabwe resumed the sale of diamonds from the Marange fields. On August 11th, buyers flew into the country's capital, Harare, from all over the world, including Israel, India, Lebanon and Russia to capitalise on the sale of over US$1.5 billion worth of diamonds.[27] Press Reports describe the Marange find as, 'the biggest in southern Africa since diamonds were discovered in South Africa a century ago'.[27]