First used by postal services to expedite and automate mail processing, mail sorting systems are now also used by corporations and other mailers to presort mail prior to delivery in order to earn discounts on postage. In the United States, for example, presort discounts can reduce the cost of First-Class Mail from $0.42 to as low as $0.324.[1] Many companies also use mail sorters to handle incoming mail such as checks, orders and correspondence. 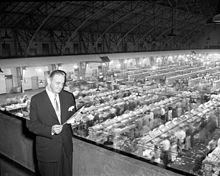 For much of the 20th Century, mail was sorted by hand using what is called a “pigeon-hole messagebox” method. Addresses were read and manually slotted into specific compartments. While early forms of a mechanical mail sorter were developed and tested in the 1920s, the first sorting machine was put into operation in the 1950s.

To handle rapidly growing mail volumes, the United States Postal Service installed the first semiautomatic sorting machine on April 10, 1957. The Transorma Letter Sorting Machine, manufactured by the Dutch company Werkspoor and distributed in the United States by Pitney Bowes, consisted of an upper and lower section, a conveyor belt transport and a series of five sorting keyboards. Operators read the destination and keyed a sorting code. The letter was then automatically transferred to a letter tray and deposited into one of 300 chutes. The Transorma could sort 15,000 letters per hour, double the amount that the same number of clerks could do by hand.

In 1965, the Postal Service put the first high-speed optical character reader (OCR) into operation that could handle a preliminary sort automatically. And in 1982, the first computer-driven single-line optical character reader was employed – which reads the mailpiece destination address then prints a barcode on the envelope that could be used to automate mail sorting from start to finish.

Mail sorters can process up to 55,000 #10 envelopes per hour. Systems can scan and archive mail piece images during the sort process for compliance and proof of mailing. Multi-Line Optical Character Reader (MLOCR) technology can also read and validate both machine-print and handwritten pieces.

Companies who receive a high-volume of incoming mail, including remittance checks, orders and correspondence, use mail sorters to help ensure that mail reaches the right person or department quickly and efficiently.

In 2007, the USPS introduced Shape-Based Pricing which offered more significant postal discounts for mailers who sorted flat-sized mailpieces. In response to this postal change, the market responded with new low-cost systems designed specifically to support flat mail sorting for mailers who process between 500 and 10,000 First-Class flats per day.