Dance Praise (marketed as Original Dance Praise after the release of its sequel) is a Christian dance video game developed and published by Digital Praise.[2]

Dance Praise was conceived by Peter Fokos, the Chief technical officer for Digital Praise, wishing to use Konami's Dance Dance Revolution video games as part of his daughter's home school exercise program. Due to objections over the game's content, Foko's daughter suggested that he develop a dance game utilizing Christian music.[2] 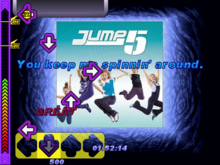 Gameplay in Dance Praise, playing Spinnin' Around by Jump5

Gameplay is similar to other four-panel dance games such as the Dance Dance Revolution series, with one key difference: whereas most four-panel dance games have the target arrows on the top portion of the screen, Dance Praise places the targets on the bottom of the screen. When the arrows approach a target zone on the bottom of the screen, the player must step on the corresponding arrow on the dance pad when arrows reach the target zone. Players are judged on their accuracy and timing. The game also features multiplayer modes, such as "Shadow Dance" mode, where players "record" steps to be played by the other player[3]. The "arcade" mode adds additional hazards and multipliers to gameplay.[3] Lyrics to the songs being played are also shown on-screen. The game also features an exercise mode.[2][3]

In an interview with The 700 Club, Fokos commented that the game has been popular with church groups, especially due to its exercise modes and content.[2] JustAdventure+'s Karla Munger gave the game an A, enjoying the gameplay and wide soundtrack, and recommending it for families.[3] Plain Games' Dave Herbert gave Dance Praise a 4.5/5, noting the quality of the game's dance pad peripheral, its diverse soundtrack, and unique gameplay elements even amidst a quality of presentation lower than the Dance Dance Revolution series, and other noted differences between the two games.[4]