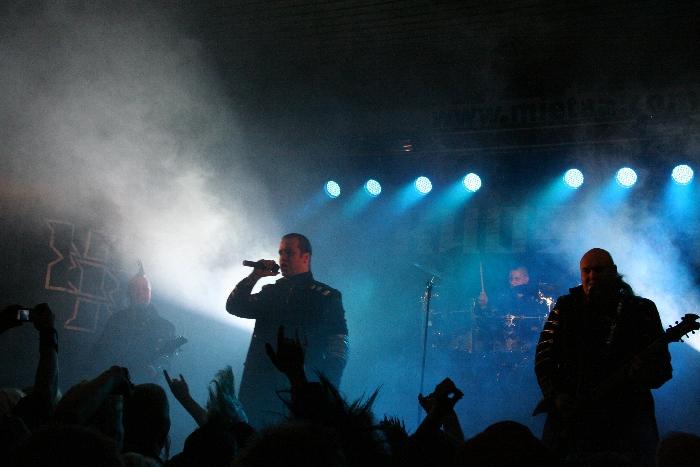 Ruoska (In Finnish "a whip") is a Finnish band from the municipality. One of the factors making them greatly stand out from those bands to those who listen to them, however, is singer Patrik Mennander's combination of low, growling speech and conventional singing. The lyrics are exclusively in Finnish.

Before becoming Ruoska, the band was called .

Ruoska is currently on hiatus and will not perform at live shows or record. This was announced by at Jurassic Rock 2008 on who said that the hiatus would last about a year.

Ruoska was formed in 2002, with some of the same members from the previous comical rock band . They released their debut album "" the same year. Fans and critics, immediately recognized a new type of music in this band, and grew to be very loyal to these new musicians. After having made two music videos, being "Kiroan" and "Epilogi", and releasing one single, "", the band returned to the studio and recorded their second album, "" in 2003, from which came one single: "Darmstadt". After this release, Ruoska established a sound that had a much more industrial sound and had more machines involved. Their popularity took a big step forward when , lead singer of the German band , commented in a Finnish magazine interview on the new single "Darmstadt" by saying that it was "most noticeable". After doing a few gigs, the Ruoska's lead singer Patrik Mennander decided to join the Finnish band for awhile.

After returning to the growing industrial metal band, Mennander and Ruoska started working on a new album, and shortly after that, in 2005, "Radium" was released. The new album, which had a bold new electronic-pop metal sound and from which one single and music video came out "", which brought a lot of new fans to the band, and they started to have new larger gigs. Then, Ruoska had to make a difficult decision by changing from to a multinational recording company, Music. When they went back to the studio, and now having to impress more fans than ever before, Ruoska created a new unique sound that was represented by their new album, "" in 2006. The singles "", "" and "" were huge hits, and "Mies yli Laidan" and "Alasin" were turned into music videos, "Mies yli Laidan" being immediately very popular. The album itself debuted at sixth place in Finnish radio charts for almost 10 weeks. Unfortunately, after the release of "Amortem", one of the band's guitarists Kai Ahvenranta left the band to be more with his family. The band grew bigger than ever before and, now with some new die-hard fans, Ruoska had a few major gigs, such as "Puustock 2007" and "Välipuistorock 2007".

Ruoska's fifth album "Rabies" was released on , . Their two singles "" and "" from the new album are already starting to be big hits, and their music video is going to be for "". Ruoska have continued making live shows, and their success never stops spreading all across , and even in the U.S., in and as well. At Jurassic Rock 2008 on , Mennander said that Ruoska would be on hiatus for about a year.

* − guitarNote: Kai Ahvenranta still does some studio work with the band.

There has been some controversy over the fact that Ruoska might be trying to copy German industrial metal band . This is often based on the "Alasin" music video. Even though receiving a lot of criticism on this point, Ruoska says that they have never tried to copy Rammstein. They have also said that they like Rammstein, and that Rammstein is only an influence to them. According to a German interview with Ruoska early in their career (after the release of their second album "Riisu"), Ruoska has translated a few of Rammstein's songs into Finnish.

As for Rammstein, they apparently liked some songs that Ruoska has sent them.