A double-ended priority queue (DEPQ)[1] is an abstract data type similar to a priority queue except that it allows for efficient removal of both the maximum and minimum element. It is a data structure in which one can insert elements and then remove the elements with minimum or maximum priority. Every element in a DEPQ has a priority or value. In a DEPQ, it is possible to remove the elements in both ascending as well as descending order.[2]

If an operation is to be performed on two elements having the same priority, then the element inserted first is chosen. Also, the priority of any element can be changed once it has been inserted in the DEPQ.[3]

Double-ended priority queues can be built from balanced binary search trees (where the mininum and maximum elements are the leftmost and rightmost leaves, respectively), or using specialized data structures like min-max heap and pairing heap. 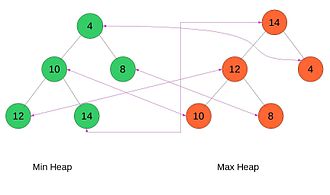 In this method two different priority queues for min and max are maintained. The same elements in both the PQs are shown with the help of correspondence pointers. 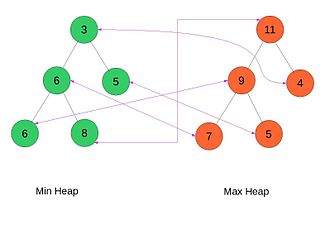 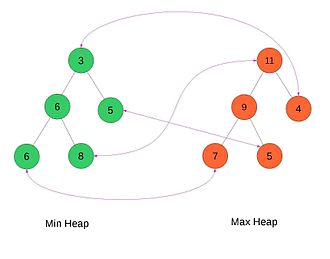 A leaf correspondence heap for the same elements as above.[1] 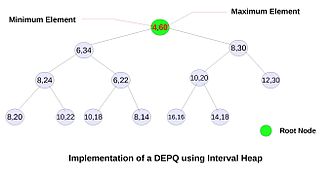 Apart from the above mentioned correspondence methods, DEPQ's can be obtained efficiently using interval heaps.[5] An interval heap is like an embedded min-max heap in which each node contains two elements. It is a complete binary tree in which:[5]

Depending on the number of elements, two cases are possible[5] -

Depending on the number of elements already present in the interval heap, following cases are possible:

The time required for inserting an element depends on the number of movements required to meet all the conditions and is O(log n).

Thus, with interval heaps, both the minimum and maximum elements can be removed efficiently traversing from root to leaf. Thus, a DEPQ can be obtained[5] from an interval heap where the elements of the interval heap are the priorities of elements in the DEPQ.

When DEPQ's are implemented using Interval heaps consisting of n elements, the time complexities for the various functions are formulated in the table below[1]

When DEPQ's are implemented using heaps or paring heaps consisting of n elements, the time complexities for the various functions are formulated in the table below[1]. For pairing heaps, it is an amortized complexity.

One example application of the double-ended priority queue is external sorting. In an external sort, there are more elements than can be held in the computer's memory. The elements to be sorted are initially on a disk and the sorted sequence is to be left on the disk. The external quick sort is implemented using the DEPQ as follows:

An airport takeoff and landing system is a practical example of a Double - ended priority queue.