The film received mainly positive reviews, but has been criticized for many inaccuracies by film critics and others including the families of the murder victims and their supporters [http://www.graphicwitness.com/carter/oscar/oscar.html "The Hurricane trashes good people--please don't give it an Oscar"]

The film narrates the life of boxer (Washington), concentrating on the period between 1966 and 1985. It describes his fight against the conviction for triple murder and how he copes with nearly twenty years in prison.

In a parallel plot, an underprivileged youth from , , () becomes interested in Carter's life and destiny after reading Carter's autobiography, and convinces his Canadian friends to engage themselves in the case. The story culminates with Carter team's successful pleas to Judge H. Lee Sarokin () of the United States District Courts.

Actor Denzel Washington and Rubin Carter worked closely in making the film. Washington said, "He went through pots and pots of coffee and packs of cigarettes. I'd drink a little coffee. It's interesting and challenging when the person is there, alive and in the room." [ [http://www.filmfestivals.com/berlin_2000/competition/film_hurricane.htm Jensen, Jorn Rossing] . The , , .]

Former World Champion sued the film's producers for over the depiction of his fight with Carter as a "racist fix." "This is a joke, [he told the "] " he never hit me that much in 15 rounds. Virtually every boxing expert then and now will tell you I won the fight." Referee Robert Polis who scored the fight 72&ndash;66 in Giardello's favor stated: "They portrayed Joey Giardello as an incompetent fighter. I thought it was ludicrous." [ [http://news.bbc.co.uk/1/hi/entertainment/646235.stm BBC News | ENTERTAINMENT | Boxer sues Hurricane's makers ] ]

Eventually, the case was settled out of court with the producers paying the retired champion a hefty sum and Jewison's agreement to make a statement on the DVD version that, "Giardello no doubt was a great fighter." [Stephen Brunt. "The Italian Stallions: Heroes Of Boxing's Glory Days" Sport Classic Books. 2003 p213 ISBN 1894963032]

The following celebrities appear in archive footage included in the film as themselves:
*
*
* Rubin "Hurricane" Carter
*
*

, film critic for the "," liked the film and the acting, and wrote, "This is one of Denzel Washington's great performances, on a par with his work in "Malcolm X"...Washington as Hurricane Carter is spare, focused, filled with anger and pride...This is strong stuff, and I was amazed, after feeling some impatience in the earlier reaches of the film, to find myself so deeply absorbed in its second and third acts, until at the end I was blinking at tears. What affects me emotionally at the movies is never sadness, but goodness."

Regarding the "fictionalized" aspects of the film, Ebert discussed why that is often the case in films, he added, "Several people have told me dubiously that they heard the movie was 'fictionalized.' Well, of course it was. Those who seek the truth about a man from the film of his life might as well seek it from his loving grandmother. Most biopics, like most grandmothers, see the good in a man and demonize his enemies. They pass silently over his imprudent romances. In dramatizing his victories, they simplify them. And they provide the best roles to the most interesting characters. If they didn't, we wouldn't pay to see them." He added, "The Hurricane" is not a documentary but a parable, in which two lives are saved by the power of the written word." [cite web | work = The Hurricane | title = Ebert, Roger | date = 2000-01-07 | url=http://rogerebert.suntimes.com/apps/pbcs.dll/article?AID=/20000107/REVIEWS/1070302/1023 | accessdate = 2007-11-20 ]

Film critic , writing for "" had mixed views of the film but did like the acting. He wrote, "In telling the story of Mr. Carter's protracted and ultimately successful fight for freedom and justice, "The Hurricane" rides to glory on an astonishing performance by Denzel Washington....That is to say, Mr. Washington leans into an otherwise schlocky movie and slams it out of the ballpark. If his Hurricane is an inspiring portrait of nobility, it is because the actor never conceals the demons of fury and despair gnawing beneath his character's forcefully articulate surface."

Holden was forthright about the veracity of the film, writing, "The film is so eager to stir us up that it thinks little of bending the facts for dramatic effect. Among its most egregious distortions is its depiction of Mr. Carter's 1964 middleweight title match with Joey Giardello. The movie (which has fine, naturalistic boxing sequences) inaccurately portrays the fight as lost by Carter solely because of the judges' racism.

The taking of such license, of course, adds an extra jolt of drama. But when these and other distortions and exaggerations are added up, it's worth wondering if that self-congratulatory glow the movie leaves us with has been gotten far too easily and at what cost." [ [http://movies.nytimes.com/movie/review?_r=1&res=9A06E6DC1638F93AA15751C1A96F958260&oref=slogin Holden, Stephen] , "The New York Times," "Fighting The Demons Within," , . Last accessed: , .]

The premiere of the film was on at the . It also was featured at the on .

The film was criticized for misrepresenting many of the facts of Carter's life and the case itself, which are documented in both his criminal and military records, and police reports and court documentation. Such critics include: "Herald-News" reporter Cal Deal; [ [http://graphicwitness.com/carter/moviepoints.html Deal, Cal] . "The Hurricane" Misleads a Trusting Public.] ; [cite web | work = Jewish World Review article by Larry Elder| title = "Hurricane" warning | date= February 4 2000 | url=http://www.jewishworldreview.com/cols/elder020400.asp | accessdate = 2006-10-23 ] Thomas Clough; Barbara Burns, the daughter of victim Hazel Tanis; George Kimball of ""; [ [http://www.graphicwitness.com/carter/pdfs/I_times.pdf Kimball, George] . Truth is swept aside by Hurricane.] Milan Simonich of the ""; Lona Manning; [cite web | work = The Lafayette Library, Lona Manning's collection of articles and legal documents about the Lafayette Grill murders | title = TopTen Myths about..... Rubin Hurricane Carter and the Lafayette Grill Murders | date = | url=http://members.shaw.ca/cartermyths/ | accessdate = 2006-10-23 ] "" reporter Robert Lipsyte; [ [http://query.nytimes.com/gst/fullpage.html?res=9D0DE5DB153BF931A25750C0A9669C8B63&sec=&spon=&pagewanted=1] Once Again, Giardello Is in the Eye of the Storm] Paul Mulshine of ""; and Jack Newfield of the "", who stated, "I knew Rubin Carter, attended his fights, covered his retrial and I didn't see much reality on the screen."

Many newspaper articles have suggested that the film's inaccuracy may well have cost Denzel Washington the Oscar. [ [http://www.africanamericans.com/HurricaneCarter.htm Rubin Hurricane Carter] at African-Americans web site.] 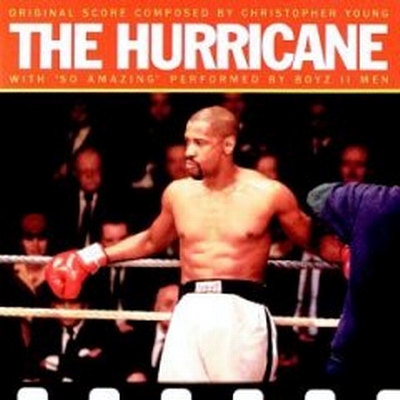 A of the soundtrack inspired by the film was released on , on the MCA label. The CD contains fourteen tracks including "Hurricane," by , "Hard Times No One Knows", by , "In The Basement" by , "Isolation", by , "Still I Rise", by , and others. [Amazon.com]

A CD of the original motion picture instrumental score was released on , on the MCA label. The CD contains fifteen tracks and was composed by . It also includes the song "So Amazing", by . [Amazon.com.]