Contract farming is agricultural production carried out according to an agreement between a buyer and farmers, which establishes conditions for the production and marketing of a farm product or products.[1] Typically, the farmer agrees to provide established quantities of a specific agricultural product, meeting the quality standards and delivery schedule set by the purchaser. In turn, the buyer commits to purchase the product, often at a pre-determined price. In some cases the buyer also commits to support production through, for example, supplying farm inputs, land preparation, providing technical advice and arranging transport of produce to the buyer’s premises. Another term often used to refer to contract farming operations is ‘out-grower schemes”, whereby farmers are linked with a large farm or processing plant which supports production planning, input supply, extension advice and transport. Contract farming is used for a wide variety of agricultural products. 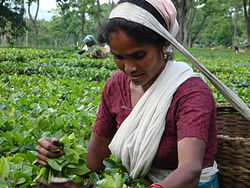 The rationale for contract farming

Contract farming is one of the different governance mechanisms for transactions in agrifood chains. The use of contracts (either formal or informal) has become attractive to many agricultural producers worldwide because of benefits such as the assured market and access to support services. It is also a system of interest to buyers who are looking for assured supplies of produce for sale or for processing. Processors are among the most important users of contracts, as they wish to assure full utilization of their plant processing capacity. A key feature of contract farming is that it facilitates backward and forward market linkages that are the cornerstone of market-led, commercial agriculture. Well-managed contract farming is considered as an effective approach to help solve many of the market linkage and access problems for small farmers.

The key benefits of contract farming for farmers can be summarized as: 1) improved access to local markets; 2)assured markets and prices (lower risks) especially for non-traditional crops; 3) assured and often higher returns; and 4) enhanced farmer access to production inputs, mechanization and transport services, and extension advice

These are a few of the models of contract farming that are accepted globally: [2]

Centralized model. The contracting company provides support to the production of the crop by smallholder farmers, purchases the crop from the farmers, and then processes, packages and markets the product, thereby tightly controlling its quality. This can be used for crops such as tobacco, cotton, paprika, sugar cane, banana, coffee, tea, cocoa and rubber. This may involve tens of thousands of farmers. The level of involvement of the contracting company in supporting production may vary.[2]

Nucleus Estate model. This is a variation of the centralized model. The promoter also owns and manages an estate plantation (usually close to a processing plant) and the estate is often fairly large in order to provide some guarantee of throughput for the plant. It is mainly used for tree crops, but can also be for, e.g., fresh vegetables and fruits for export. [2]

Multipartite model. The multipartite model usually involves the government, statutory bodies and private companies jointly participating with the local farmers. The model may have separate organizations responsible for credit provision, production, management, processing and marketing of the produce.[2]

Informal model. This model is basically run by individual entrepreneurs or small companies who make simple, informal production contracts with farmers on a seasonal basis. The crops usually require only a minimal amount of processing or packaging for resale to the retail trade or local markets, as with vegetables, watermelons, and fruits. Financial investment is usually minimal. This is perhaps the most speculative of all contract-farming models, with a risk of default by both promoter and farmer.[2]

Intermediary model. This model has formal subcontracting by companies to intermediaries (collectors, farmer groups, NGOs) and the intermediaries have their own (informal) arrangements with farmers. The main disadvantage in this model is it disconnects the link between company and farmer.[2]

As with any form of contractual relationship, there are potential disadvantages and risks associated with contract farming. If the terms of the contract are not respected by one of the contracting parties, then the affected party stands to lose. Common contractual problems include farmer sales to a buyer other than the one to whom the farmer is contracted (side selling or extra-contractual marketing), a company's refusal to buy products at the agreed prices, or the downgrading of produce quality by the buyer. Side selling by farmers to competing buyers is perhaps the greatest problem constraining the growth of contract farming. Contractors also may default by failing to pay agreed prices or by buying less than the pre-agreed quantities.

Another concern about contract farming arrangements is the potential for buyers to take advantage of farmers. Buying firms, which are invariably more powerful than farmers, may use their bargaining clout to their financial advantage. Indeed, if farmers are not well organised or where there are few alternative buyers for the crop or it is not easy to change the crop, there is a danger that farmers may have an unfair deal. Tactics sometimes used are changing pre-agreed standards, downgrading crops on delivery so offering lower prices, or over-pricing for inputs and transport provided. Strengthening farmer organisations to better access appropriate services such as credit, extension services and market information and improving their contract negotiating skills can redress the potential for exploitation of farmers and poorly formulated contracts and their enforcement.

Despite the typical problems listed above, contractual arrangements are gaining popularity as they are being used more frequently in agriculture worldwide.