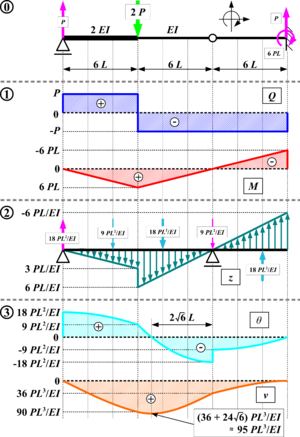 The conjugate-beam method is an engineering method to derive the slope and displacement of a beam. The conjugate-beam method was developed by H. Müller-Breslau in 1865. Essentially, it requires the same amount of computation as the moment-area theorems to determine a beam's slope or deflection; however, this method relies only on the principles of statics, so its application will be more familiar.[1]

The basis for the method comes from the similarity of Eq. 1 and Eq 2 to Eq 3 and Eq 4. To show this similarity, these equations are shown below.

The following procedure provides a method that may be used to determine the displacement and slope at a point on the elastic curve of a beam using the conjugate-beam method.