The Legend of Spyro: A New Beginning

The Legend of Spyro: A New Beginning

The Legend of Spyro: A New Beginning is the first game in The Legend of Spyro trilogy, a reboot of the Spyro the Dragon series. It was developed by Krome Studios for the PlayStation 2, Xbox, Nintendo GameCube and Game Boy Advance versions, Amaze Entertainment for the Nintendo DS version[1] and The Mighty Troglodytes for the Mobile phone version.

The game utilizes the voices of celebrities featuring: Elijah Wood as the voice of Spyro, David Spade as Sparx and Gary Oldman as Ignitus. The developers planned to make a Crash Bandicoot game but Sierra/Vivendi asked them to develop The Legend of Spyro instead. 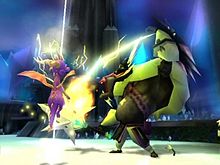 An in-game screenshot for A New Beginning. Spyro is seen fighting an ape soldier with an electricity move.

The Legend of Spyro: A New Beginning uses a more action-based focus than previous Spyro games. Rather than the previous focus on platforming, the gameplay is now more combat based. Spyro has a variety of combat moves as well as four different breath attacks: fire, electricity, ice and earth, which he can use as both long range and short range attacks. Spyro can also use furies, huge blasts of elemental energy. The game has fewer levels than previous Spyro games, with six levels that progress from a starting point towards a final destination and boss encounter in a linear fashion, and two rail shooter style flying levels adjoining them.

The DS version has additional attacks and challenges. As well as breath attacks and furies, Spyro can create an elemental shield around himself that protects him from enemies while hurting attacking enemies. Also, the DS version has extra side missions in the form of puzzles.

The game begins inside a temple, where a large red dragon named Ignitus is watching over an egg; it is the "Year of the Dragon", a time every ten generations when new dragon eggs are brought to the realm. A dragons' prophecy tells that every ten generations, a rare purple dragon will be born, who will direct the fate of that era; Ignitus is looking after such an egg.

The dragons are, however, at war with an enemy known as the "Dark Master" who also knows of the prophecy, and lays siege to the temple, intent on destroying the brood of eggs. Ignitus escapes with the purple dragon's egg, leaving it to drift downriver into a swamp, hoping for the best. The egg is discovered by a family of dragonflies, and upon hatching, they name the dragon Spyro and adopt him into the family and raise him as one of their own, alongside Sparx, a dragonfly born the same day.

One day, after coming under attack by strange foes and discovering that he can breathe fire, Spyro is told that he is not a dragonfly himself but a stranger from a distant land; Spyro decides to leave the swamp in search of his true home; Sparx, though reluctant at first, decides to follow along. Spyro is pursued by hostile forces, but eventually comes into contact with a distraught Ignitus, who although pleased that Spyro is alive, fears that with the Dragon Temple under occupation by their enemy, and led by an enemy dragon named Cynder, their war is already lost.

Spyro convinces Ignitus to lead him to the Temple, and is able to drive Cynder's forces out, after which Ignitus tells Spyro more about their war against the dark armies, offers Spyro some training in the art of the fire element, and then sends Spyro off to rescue three other dragons from Cynder's forces. One by one, Spyro clashes with Cynder's armies, rescues the three other dragons, Volteer, Cyril, and Terrador, while acquiring new skills and training along the way. It is learned that Cynder has been draining the dragons' power into crystals.

Cynder, however, attacks Spyro shortly after he rescues the final Dragon Guardian, Terrador; Ignitus intervenes to fight Cynder but is captured. It is revealed that it was the four dragons who originally sealed away the Dark Master, and that Cynder is using the dragons' drained powers to open the seal. Ignitus's power is the final key in unsealing the Dark Master, so Spyro is sent on a final, direct assault against Cynder's fortress.

Spyro attempts to fight Cynder, but Cynder succeeds in draining Ignitus's power of fire into a crystal, and escapes to the sealed realm of the Dark Master. During the fight, Spyro had noticed there was something familiar in Cynder's eyes. Ignitus then tells Spyro the rest of the story of what happened the night of the attack on the temple. After sending Spyro's egg down the river, Ignitus had returned to see that the Dark Master's forces had destroyed the brood of eggs, except one - for only a dragon born in the Year of the Dragon can open the portal and release the Dark Master: Cynder, who had been transformed by the Dark Master's sinister powers. Ignitus fears that it is too late to stop her, but Spyro pursues Cynder and forces a showdown, eventually using all of his power in a final attack which defeats her, purging her of the Dark Master's influence and returning her to her true form, a young dragon the same size as Spyro. The realm begins to collapse in on itself; Sparx insists on making a quick exit but Spyro declares he will not leave Cynder behind with the Dark Master; though barely, Spyro is able to grab Cynder and escape safely.

Though victorious, the battle cost Spyro much of his own strength and powers, and both Spyro and Cynder suspect that the Dark Master is still alive somewhere; the war is still far from over. The story continues in The Legend of Spyro: The Eternal Night.

Spyro and Sparx are described as being an "oddly-matched, yet compatible pair". Spyro was adopted into a family of dragonflies, growing up alongside Sparx, a dragonfly born the same day. Through an ape attack, Sparx parents tell him that he isn't a dragonfly. In fact, he is a dragon from a distant place. Learning this, Spyro set out to find this place and Sparx tagged along with him.

The Dragon Guardians are a group of four elder dragons, each the master of an elemental power and who in turn teach that power to Spyro once he finds them. Ignitus, a red-orange dragon, is very wise and is master of fire. The first guardian you rescue is the electricity guardian, Volteer, a highly intelligent dragon with a lightning fast tongue. The second guardian you rescue is the ice guardian, Cyril, a sassy rainbow dragon. The last guardian is Terrador the earth master, a militant green dragon with a spike ball tail tip and master of earth.

A large, powerful black dragon, Cynder serves as the primary antagonist in The Legend of Spyro. Although born from the same batch of eggs as Spyro (though not siblings) and in truth the same size and age as Spyro, Cynder's egg was seized by the Dark Master's forces and she was raised by them; under the influence of the Dark Master's power, Cynder grew to gigantic size and strength quickly due to the dark magic the Dark Master shrouded Cynder in, and was then able to defeat and capture the Dragon Guardians, collecting their power in order to unseal the Dark Master from imprisonment. After her defeat from Spyro, Cynder returned to her original size and strength, and was safely returned to the Dragon Temple to celebrate Spyro's victory.

Krome Studios, best known as developers of their famed IP franchise Ty the Tasmanian Tiger, were asked by Sierra Entertainment/Vivendi Games to develop The Legend of Spyro. After Krome showed Sierra their technology they were using to develop a Crash Bandicoot game, Sierra demanded a prototype for what subsequently became The Legend of Spyro.

The Legend of Spyro: A New Beginning received mixed but generally positive reviews. Critics praised the presentation and graphics but criticized the repetitive gameplay and poor voice-acting. Fans were disappointed by the emphasis on combat compared to previous installments.