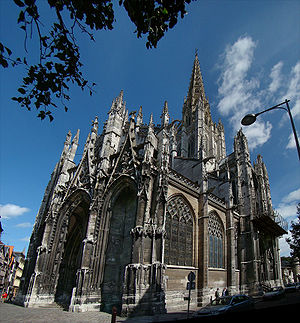 The Church of Saint-Maclou is a Roman Catholic Flamboyant church in Rouen, France. Along with Rouen Cathedral and the Church of St. Ouen, Saint-Maclou is considered one of the best examples of Gothic architecture in Rouen and is cited as a church of monumental design in miniature.

Construction on Saint-Maclou began sometime after 1432; it was to replace an existing parish church that had suffered from several years of neglect resulting in a collapsed transept roof.[1] In its place, master mason Pierre Robin created a basilica style church with four radiating chapels around an octagonal choir. The transept is non-projecting complete with piers that support the above lantern tower. The choir is rather large in size for the structure and has two bays and four radiating chapels that branch off of the ambulatory. Overall, the plan places its emphasis on the transept which is midway between the choir and the nave. Saint-Maclou has the classic three-story elevation of an arcade, triforium, and clerestory. The famous western facade is towerless with five gabled porch with flying buttresses above the aisles that are attached to the western wall featuring a rose window.

The patrons of Saint-Maclou were of the wealthy merchant class that had experienced an immense social and economic growth during the fourteenth and fifteenth centuries. The family most closely associated with the rebuilding of the church was the Dufour family. The patrons were responsible for the selection of the master mason, Pierre Robin, as well as for part of the overall style of the church. The Dufours and others are cited as being the impetus behind the similarities between Saint-Maclou and Rouen Cathedral.