The Chemin de Fer Nyon-St. Cergue-Morez (NStCM) is a narrow gauge railway which nowadays operates between Nyon, on the northern shore of Lake Geneva and the French border at La Cure. 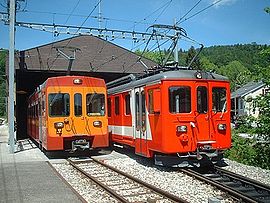 The line, built to 1,000 mm (3 ft 3 3⁄8 in) gauge, was opened in three sections, the first from Nyon, a town on the shores of Lake Geneva, to the Jura mountain resort village of Saint-Cergue on 12 July 1916, then to the French border at La Cure, opened on 18 August 1917. The third section, built by the French Company Chemins de fer électriques du Jura (CFEJ), taking the line over the border was opened to the French town of Morez on 7 March 1921 giving a total length of 39 km. In effect this small line linked the Swiss railways main line from Geneva to Lausanne to that of the Chemin de Fer Paris, Lyon, Mediterranee (PLM) (from 1938 this was the SNCF). With the exception of the period from 1940 to 1948 this enabled direct services to operate on a daily basis, although wintertime conditions often made this a difficult feat. Because of its steep gradients the line was electrified from the outset, originally at the unusual, if not unique, 2,200 volts d.c. The French section (12 km) from La Cure to Morez closed on 28 September 1958.

Originally the line commenced outside the main station in Nyon and after passing below the Swiss railways main line it climbed steadily, steeply in places taking large curves to ease the gradient, to the mountain resort of St. Cergue. From here it runs alongside the road through the Col de la Givrine, with a summit of 1232 m. above sea level, to the village of La Cure, nowadays its upper terminus. It was here the line crossed the French border and again running alongside the road, passing the village of Les Rousses it duly arrived in the streets of Morez. The line then descended steeply to terminate in front of the PLM station.

The earliest section to open, that in Switzerland, continued after the closure of the French section and in the 1980s was part of a modernisation programme. The voltage was changed to the more universally used 1500 volt d.c. and automatic block signalling installed. New rolling stock arrived on the line in 1985 with the introduction of new “automotrice” – powered driving railcars and these were followed the following year by voitures pilote - driving trailers. Plans were put forward in 1999 to extend the line some 2.5 km. over the French border to the village of Les Rousses but this did not prove cost effective to the communities involved and was rejected. In 2004 the Nyon terminus was moved to a two platform underground station on the north side of the main line approached by escalators from the station underpass.

The original “automotrice”, of which 7 were built, were heavy duty vehicles and could haul several trailer cars. Two of these have survived, restored to working order, at the Chemin de Fer de la Mure near Grenoble. Two other examples were sold to the same railway but have yet to be restored. Some trailer cars have also survived including No. B7 which has been restored at the Blonay-Chamby museum line near Montreux and another example at the Chemin de Fer Voies Ferrees du Velay in Haute Loire. The vehicles carried a dark red livery.