Charlies Fremont "Pruner" West was an American track star, football player, and respected medical doctor. He was the first African American to play quarterback in the Rose Bowl.[1]

West was born in 1899 to William B. and Hannah Thomas from Washington County, Pennsylvania.[2] He was the third of four children. The family moved from their farm in Burgettstown to Washington, Pennsylvania in 1911.[2] West's father opened a drug store that later was turned into a grocery store and was elected to Washington City Council.[2] West's nickname, Pruner, came from a mispronunciation of "Peruna" a cough syrup sold by his father.[2] Charles was an outstanding athlete at Washington High School and was scouted by Pittsburgh Pirates.[2] Rumors circulated that he had outraced a horse and wrestled the family bull to the ground.[2] 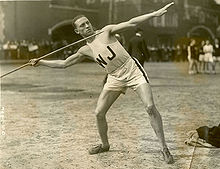 In 1920, he entered Washington & Jefferson College, where he played football and threw javelin for the track and field team.[2] He was captain of track team in 1924.[2]

In 1921, he was the halfback and the backup quarterback for the Washington & Jefferson football team, but took over the starting quarterback job after the game against University of Pittsburgh, a position he would hold the rest of the season.[2] That following January, he became the first African American quarterback to play in the Rose Bowl and led his team to a hard-fought 0-0 tie against the California Golden Bears.[2]

On November 24, 1921, W&J arrived via train in Wheeling, West Virginia to play the West Virginia Mountaineers amid chants of "Kill the nigger," in reference to West.[2] The crowd was unable to tell which W&J player was him, as Pruner was a relatively light-skinned African American.[2] West was the last member of the team off the train and told the confused crowd, "We didn't bring him with us this time."[2] Following the 13-0 victory, Pruner visited a Wheeling drug stores that displayed a sambo-type doll with the tag "West" in an ambulance.[2] West introduced himself to the drug store owner and asked for the display "after [he] was done with it." The embarrassed store owner gave it to him on the spot.[2]

In a similar incident, Washington & Lee traveled to Washington for a game, but refused to play against West, as it was against their "tradition."[2] Robert "Mother" Murphy sent the Washington & Lee team, who knew that West was on the roster when they scheduled the game, a message saying, "W&J does not play without Pruner West."[2] Washington & Lee balked and went home with their "guarantee" and a 1-0 forfeit loss amid catcalls and a "near riot" at the train station.[2] It became known later that Murphy knew that West had a sprained ankle and would not have been able to play anyway, but he refused to honor W&L's request.[2] Pruner missed the first half of the November 4, 1922 game against Lafayette College at the Polo Grounds with his arm taped to his side. He returned for the second half to spark a 14 point comeback to win 14-13. Walter Camp named him as an All American honorable mention in 1923.[2]

Pruner later signed with the Akron Pros professional football team, but he quit to attend medical school at Howard University in Washington, DC, where he also coached football. He practiced medicine in Alexandria, Virginia for many years. He and his wife Laverne had 2 children: Linda West Nickens and Nathaniel West. He was an excellent skeet and trap shooter and loved hunting and fishing. In 1978, West was awarded the Distinguished Alumni Service Award from W&J.[3] He was inducted into the Pennsylvania Sports Hall of Fame on May 6, 1979.[3] He died in 1979.

In 2011, his role in the advancement of African Americans in collegiate sports was recognized in a joint W&J/West Virginia University ceremony at the U. Grant Miller Library.[3]