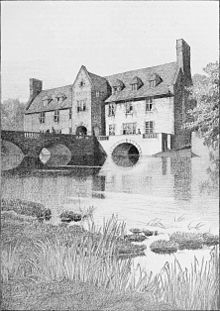 Charles Edward Mallows (5 May 1864–2 June 1915, age 51), often known as C. E. Mallows, was an English landscape architect. He was born in Chelsea, London and spent his childhood at Flatford Mill, East Bergholt, Suffolk where his uncle ran the mill. He studied in Bedford and London. In 1895 he opened an office in Bedford with George Grocock and worked in the Arts and Crafts tradition designing cottages, schools, shops and restoring churches. He was made a fellow of the Royal Institute of British Architects in 1900 and by the following year was the diocesan surveyor for Ely. Mallows rented rooms adjoining those of the landscape architect Thomas Hayton Mawson, and occasionally worked with him. His major commission was Tirley Garth in Cheshire, where he designed the house and the major part of the gardens. He died in 1915 at Biddenham, Bedfordshire leaving an estate of nearly £3,000.[1]