—And He Built a Crooked House 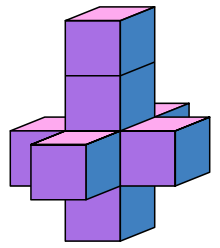 "'—And He Built a Crooked House—'" is a science fiction short story by Robert A. Heinlein first published in Astounding Science Fiction in February 1941.[1] It was reprinted in the anthology Fantasia Mathematica (Clifton Fadiman, ed.) in 1958 and in the Heinlein collection The Unpleasant Profession of Jonathan Hoag in 1959. The story is about a mathematically inclined architect named Quintus Teal who has what he thinks is a brilliant idea to save on real estate costs by building a house shaped like the unfolded net of a tesseract. The title is a paraphrase of the nursery rhyme "There Was a Crooked Man".

Teal, a "graduate architect" who refuses to discard the Picard-Vessiot theory, designs what he wishes could be a four-dimensional house.

The house is quickly constructed, in its peculiar "inverted double cross" shape (having eight cubical rooms, arranged as a stack of four cubes with a further four cubes surrounding the second cube up on the stack). However, the night before Teal is to show the new owners around the house, an earthquake causes the house to fold into an actual four-dimensional tesseract. The three of them arrive the next morning to find what appears to be just a single cubical room. Believing the top seven rooms to have been stolen during the night, they go inside to look for clues.

What they find is quite unbelievable: Not only are the upper floors completely intact, but the stairs seem to form a closed loop, in that the stairs from the top room lead back into the bottom room and not to the roof. What is more, there appears to be no way to get back out, because all the doors and even the windows lead directly into other rooms. At one point, they look down a hallway and are shocked to see their own backs.

Teal tries to play up the benefits of the situation, but in attempting to move from one room to another by way of a French window, he falls outside and lands in shrubbery. Ever the optimist, he notes as he re-enters the house that they do have a way of leaving the structure after all. It seems to have something to do with their state of mind while passing through a window.

Exploring further, they find that the windows of the original top room do not connect where they mathematically "should". One gives a dizzying view from above a skyscraper, another an upside-down view of a seascape. A third window looks out on nothing, that is, a place of no-space, with no color, not even black. The fourth window looks out on an unearthly desert scene. Opening the window they find the air on the other side breathable. Just then another earthquake hits, and so they exit in a panic, through the open window. They find themselves in a desert with unearthly, twisted, treelike vegetation around them, with no sign of the house or the window they just jumped through. They are only slightly relieved when they discover, from a passing truck driver, that they are in Joshua Tree National Monument, and not stranded on another planet.

Returning to the house, they find it has vanished. "It must be that on that last shock it simply fell through into another section of space," Teal remarks. "I can see now that I should have anchored it at the foundations."

A screenplay adaptation was completed in October 2009 for Robert A. Heinlein's "And He Built A Crooked House" by Tom Raymond and Charles Welty for Fidelis Entertainment.[2]