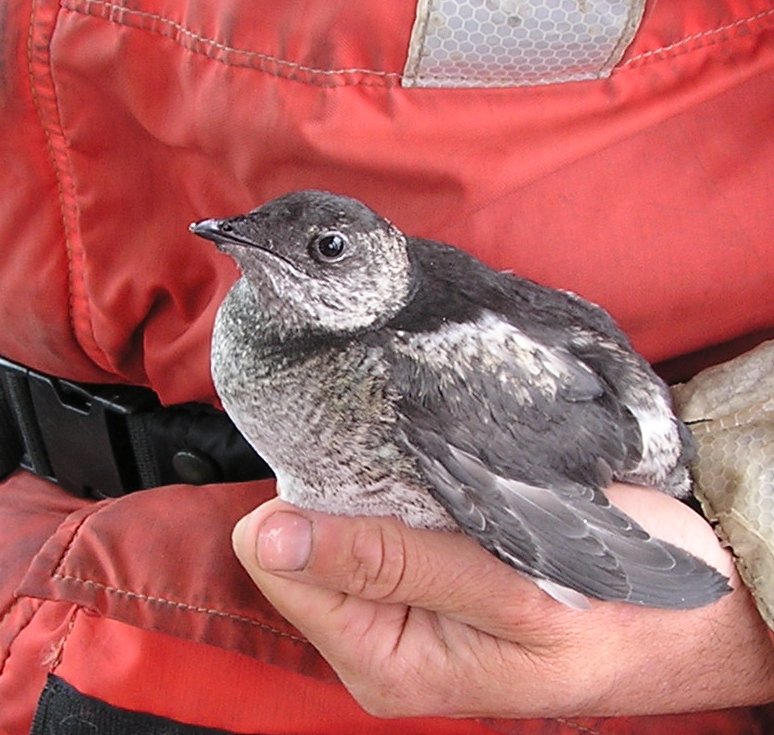 The Kittlitz's Murrelet, ("Brachyramphus brevirostris") is a small found in the waters off and Eastern . This critically endangered species is, like the closely related , unusual for s in not being colonial, nesting instead in isolated locations on mountain tops, where the nests were known to Native Americans for many years before skeptical ornithologists described and photographed them. It is a poorly known and little studied species, although concern over its status and that of the closely related Marbled Murrelet has led to a recent increase in research.

The common name of this species commemorates the German zoologist , who first collected this species.

The Kittlitz's Murrelet is, like the Marbled Murrelet, a small compact auk, 25 cm long with tiny legs and cryptic during the breeding season. The colour of the breeding plumage, greyish-brown, reflects its habit of breeding on bare ground near snowfields. In the winter it adopts the black and white plumage typical of many seabirds. Its bill is smaller than that of the Marbled Murrelet.

The Kittlitz's Murrelet mostly breeds and lives in the coastal areas of Alaska, both on the mainland around , the , sparsely up the west coast and along the . It also nests in Siberia and possibly .

The Kittlitz's Murrelet feeds close to the shore, in particular in the waters around tidewater s. It feeds on larval fish, and other small zooplankton. Chicks are fed with slightly larger fish carried in the bill.

The Kittlitz's Murrelet is one of the least known auks, although it is known not to be colonial, nesting instead above the on mountains inland from the sea. The nests are situated on south facing slopes on bare ground, often close to snow. A single egg is laid (and incubated for an unknown amount of time). Chicks are fed throughout the day, and reach fledging weight in around 25 days. The exposed nature of the nesting grounds mean that chicks keep their downy feathers later than most other birds, losing the down 12 hours before they fledge. It is assumed that they fly to sea on fledging, but it has also been suggested that they reach the seas through rivers. After the chick fledges it is thought to receive no further parental care, no chick has ever been seen with an adult at sea.

The Kittlitz's Murrelet is considered to be critically endangered by the , although it is not listed under the (it was a Species of Conservation Concern until that category was abolished). It is threatened by habitat loss (as it is seemingly dependent on retreating glaciers), disturbance by boats and s. An estimated 7-15% of the world population was killed during the "" oil spill.