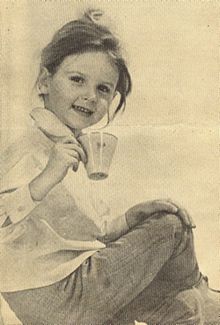 Małgorzata Piekarska called : Małgosia, was born in 1954 in Poland. She was cast in four movies during the late 50s' and early 60s', among which her most popular role is the one in "Awantura o Basię" movie from 1959. At those times, Piekarska did couple of "kind-of social commercials". Currently, she's been living and working in Australia.