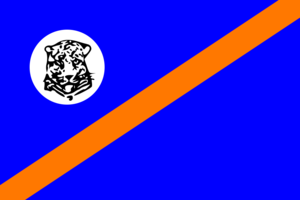 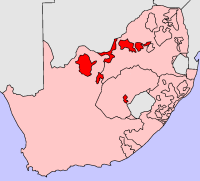 Bophuthatswana was given nominal self-rule in 1971, and became nominally independent on , ; Kgosi was appointed head of state. In reality Bophuthatswana was a client state of -era South Africa and was not recognized as an independent country by any government other than that of South Africa. Those relocated to Bophuthatswana lost their South African citizenship. In 1988 an attempted was suppressed by South Africa, who reinstated Mangope. The coup was later said to have been led by the opposition at the time, the People's Progressive Party (PPP) under the leadership of Rocky Malebana Metsing. A second coup in 1990 was also thwarted.

It was the richest of the TBVC states (nominally independent Bantustans), as it had mines. It also made money from the Sun City casino, which was a day trip from and , where was illegal under the National Party government (as it was in the whole country).

In the beginning of 1994 with South Africa heading for democratic elections, the autocratic President resisted reincorporation into South Africa. 40 people were wounded when Bophuthatswana Defence Force troops opened fire on striking s. Mangope took an increasingly hardline stance, rejected chairman Judge 's plea for free political activity in the territory, and fired the staff of the , closing down two television stations and three radio stations.

The white supremacist group (AWB) took the opportunity to move in and try to restore the apartheid status quo, but was humiliated in early March when, in the presence of s and a TV crew, uniformed members of the AWB on an armed incursion to the Mmabatho/ area shot at people alongside the road, injuring and killing many. [cite web
url=http://www.doj.gov.za/trc/decisions/1999/ac990239.htm
title=Amnesty Application - Ontlametse Bernstein Menyatsoe
publisher=Truth and Reconciliation Commission] They themselves were shot at by members of the (BDF) and the Police and forced to retreat. Three wounded AWB members were shot dead at point blank range by of the BDF while retreating. [cite web
url=http://www.info.gov.za/speeches/1999/990806933a1001.htm
title=Amnesty granted for killing of three AWB members in 1994
publisher=Truth and Reconciliation Commission
date=1999-08-05] These killings effectively spelt the end of white right-wing military opposition to democratic reforms. Mangope was replaced by an interim government, and on April 27 of the same year all ten homelands, including Bophuthatswana, were reincorporated into .

With the end of apartheid, of the 7 enclaves, 5 were added into the . Thaba Nchu became part of the Free State and Moretele (the easternmost part) became part of . The capital, Mmabatho, is now the capital of the North West province.

* "The Bang-bang Club: The Making of the New South Africa", and , William Heinemann, 2000 ISBN 0-434-00733-1
* [http://www.polity.org.za/html/govdocs/commissions/1998/tebbutt/index.html Report of the Tebbutt Commission of Inquiry] into the violence Bophuthatswana on 11 March 1994
* [http://www.southafrica.info/ess_info/sa_glance/history/tenyearsago2.htm 72 days that shaped South Africa - compilation of newspaper excerpts from 1994]