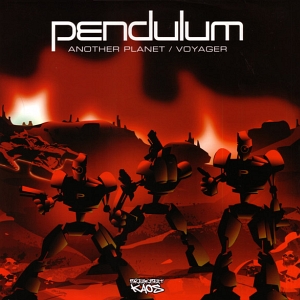 "Another Planet / Voyager" is the second single by Australian band Pendulum. It was released on 23 February 2004 by independent label , and was their first single to use the 12" picture disc format. The single peaked at number 46 in the , and reached number one in the .

The song "Another Planet" contains samples from 's musical version of "The War of the Worlds", and was included on the CD edition of "" when it was released in July 2005. Both tracks appeared on the "Jungle Sound - the Bassline Strikes Back!"

Unlike every other single released by Pendulum to date, "Another Planet / Voyager" was written and produced in full by all members of the band, which at that time included , Paul Harding and Gareth McGrillen.

McGrillen had developed a fear of "The War of the Worlds" when he was quite young, to the extent that he could not look at the album cover. Years later, while he was working on one song with Swire, he decided to face his fear by travelling home and returning with his father's copy, which they then sampled for the song. [Abbott, Spence (25 June 2008). [http://uk.music.ign.com/articles/884/884377p2.html IGN: Pendulum Q&A] . "IGN Music". Retrieved on 1 October 2008.] One of the samples they used contained a line spoken by Burton, "...and I wandered through the weird and lurid landscape of another planet", which later gave the song its name.clearleft

"Another Planet / Voyager" was the first single by Pendulum receive some widespread recognition, and as such was subject to some critical attention. One review of the single describes "Voyager" as "a really well done piece of dancefloor drum and bass action", and says that "Pendulum have coined their own recognisable sound, but manage to stay fresh at the same time". [Anne, Sally "Risk" (7 June 2004). [http://www.inthemix.com.au/music/14390/Pendulum_Another_Planet Music News Pendulum - Another Planet] . "inthemix.com.au". Retrieved on 26 September 2008.] "Another Planet" in particular has received a wide range of criticism, partially due to its placement on two albums, and has been described both as "conventional [drum and bass] , being largely instrumental and synth based", [Moss, Jack "System-J" (6 September 2005). [http://www.trancecritic.com/modules.php?name=MReviews&op=show&rid=91 Album Pendulum - Hold Your Colour] . "TranceCritic.com". Retrieved on 26 September 2008.] and as a "crowd favourite ... [that] sounds far too serious for that goofy, bouncy bassline to work". [Moss, Jack "System-J" (26 April 2006). [http://www.trancecritic.com/modules.php?name=MReviews&op=show&rid=172 Compilations/DJ Mixes Pendulum - Jungle Sounds Gold] . "TranceCritic.com". Retrieved on 26 September 2008.]

"Another Planet / Voyager" was released on 23 February 2004 in two formats, a standard 12" single and a 12" picture disc, the first of several singles by Pendulum to use this format. It was also their first release with independent drum and bass label , which remained their main label for the next three years. [ [http://www.rolldabeats.com/artist/pendulum/releases Pendulum (releases)] . "rolldabeats". Retrieved on 26 September 2008.]

"Another Planet" was featured on the CD edition of "", released in July 2005, but was later replaced by the song "Blood Sugar" after the album was reissued. [ [http://www.rolldabeats.com/release/breakbeat_kaos/bbk002cd Breakbeat Kaos :: BBK002CD :: Hold Your Colour] . "rolldabeats". Retrieved on 26 September 2008.] It was also featured on the mix album "", alongside Pendulum's remix of Nightbreed's "Pack of Wolves". An alternative version of the song, titled "Another Planet (VIP)", was produced and released on the "Bass Invaderz" . [ [http://www.rolldabeats.com/release/human_imprint/huma8014_1 Human Imprint :: HUMA8014-1 :: Bass Invaderz] . "rolldabeats". Retrieved on 28 September 2008.] Both tracks from the single were also included in another compilation album – "Jungle Sound - the Bassline Strikes Back!" – released in October 2004. [ [http://www.rolldabeats.com/release/breakbeat_kaos/bbk001cd Breakbeat Kaos :: BBK001CD :: Jungle Sound: The Bassline Strikes Back] . "rolldabeats". Retrieved on 26 September 2008.]

"Another Planet / Voyager" was the first single by Pendulum to appear in the . It entered the chart on 6 March 2004, peaking at number 46, and remained in the chart for a total of two weeks.

These are the major formats and associated track listings of single releases of "Another Planet / Voyager". Both tracks were written and produced by , Paul Harding, and Gareth McGrillen.