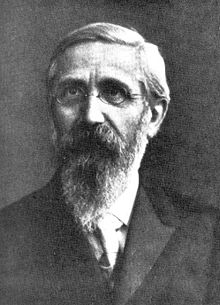 Paul Gerhard Natorp (24 January 1854-17 August 1924) was a German philosopher and educationalist, considered one of the co-founders of the Marburg school of neo-Kantianism. He was known as an authority on Plato.

Paul Natorp was born in Düsseldorf, the son of the Protestant minister Adelbert Natorp and his wife Emilie Keller. From 1871 he studied music, history, classical philology and philosophy in Berlin, Bonn and Strasbourg. He completed his dissertation in 1876 in Strasbourg under the supervision of the positivist Ernst Laas and in 1881 completed his Habilitation under Hermann Cohen. In 1885 he became extraordinary professor and in 1893 became ordinary professor in philosophy and pedagogics at Marburg University, a position he retained until his retirement in 1922. In the winter semester of 1923-24 Natorp conducted an intensive exchange of ideas with Martin Heidegger, who had been called to Marburg and whose work on Duns Scotus Natorp had read very early on. In 1887 he married his cousin Helene Natorp; they had five children. Natorp was an ambitious composer, who wrote chiefly chamber music (including a cello sonata, a violin sonata, and a piano trio). He also wrote some 100 songs and two choral works. He conducted a correspondence with Johannes Brahms, who dissuaded him from becoming a professional composer.

He was an influence on the early work of Hans-Georg Gadamer and had a profound effect upon the thought of Edmund Husserl, the "father" of phenomenology. Further, it was to Natorp's scholarly influence and reputation that Husserl owed some of his success. His students included the philosopher and historian Ernst Cassirer, and the author of Doctor Zhivago, Boris Pasternak.