/ˈnaɪ.oʊ/; 23 April 1895 – 18 February 1982), born Edith Ngaio Marsh, was a New Zealand crime writer and theatre director. There is some uncertainty over her birth date as her father neglected to register her birth until 1900. She was made a Dame Commander of the Order of the British Empire in 1966. 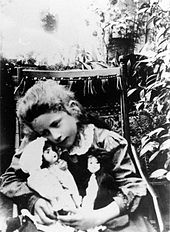 Ngaio Marsh with her two dolls in ca 1905 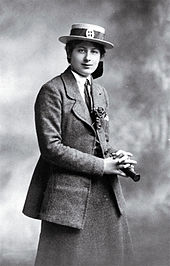 Ngaio Marsh (school prefect) in her St. Margaret's College school uniform, between 1910 and 1914

Ngaio Marsh was educated at St Margaret's College in Christchurch, New Zealand, where she was a foundation pupil. She studied painting at the Canterbury College School of Art before becoming an actress with the Allan Wilkie company touring New Zealand. From 1928 onward she divided her time between living in the United Kingdom and in her native New Zealand.[1]

Internationally she is best known for her 32 detective novels published between 1934 and 1982. Along with Dorothy L. Sayers, Margery Allingham and Agatha Christie, she has been classed as one of the four original "Queens of Crime"—female writers who dominated the crime fiction genre in the Golden Age of the 1920s and 1930s.

All her novels feature British CID detective Roderick Alleyn. Several novels feature Marsh's other loves, the theatre and painting. A number are set around theatrical productions (Enter a Murderer, Vintage Murder, Overture to Death, Opening Night, Death at the Dolphin, and Light Thickens), and two others are about actors off stage (Final Curtain and False Scent). Her short story "'I Can Find My Way Out" is also set around a theatrical production and is the earlier "Jupiter case" referred to in Opening Night. Alleyn marries a painter, Agatha Troy, whom he meets during an investigation (Artists in Crime), and who features in several later novels.

Most of the novels are set in England, but four are set in New Zealand, with Alleyn either on secondment to the New Zealand police (Vintage Murder, Colour Scheme, and Died in the Wool), or on holiday (Photo Finish); Surfeit of Lampreys begins in New Zealand but continues in London.

Marsh's great passion was the theatre. In 1942 she produced a modern-dress Hamlet for the Canterbury University College Drama Society (now UCDS), the first of many Shakespearean productions with the society until 1969. In 1944, Hamlet and a production of Othello toured a theatre-starved New Zealand to rapturous acclaim. In 1949, assisted by entrepreneur Dan O'Connor, her student players toured Australia with a new version of Othello and Pirandello's Six Characters in Search of an Author. In the 1950s she was involved with the New Zealand Players, a relatively short-lived national professional touring repertory company.

She lived long enough to see New Zealand set up with a viable professional theatre industry with realistic Arts Council support, with many of her protégés to the forefront. The 430-seat Ngaio Marsh Theatre at the University of Canterbury is named in her honour.[2] Her home on the Cashmere Hills is preserved as a museum.[3]

In 2010 the Dame Ngaio Marsh Trust created the Best Crime Novel Award, to be given annually. In its inaugural year, the three finalists were Neil Cross Captured ; Vanda Symon Containment; and Alix Bosco (pseudonym), Cut and Run. Alix Bosco won the inaugural award.[4]

Collected in the book Death on the Air and Other Stories, first published in Great Britain in 1995:

Four of Marsh's novels aired on New Zealand television in 1977. Nine were adapted for television as The Inspector Alleyn Mysteries and aired on the BBC between 1990 and 1994.