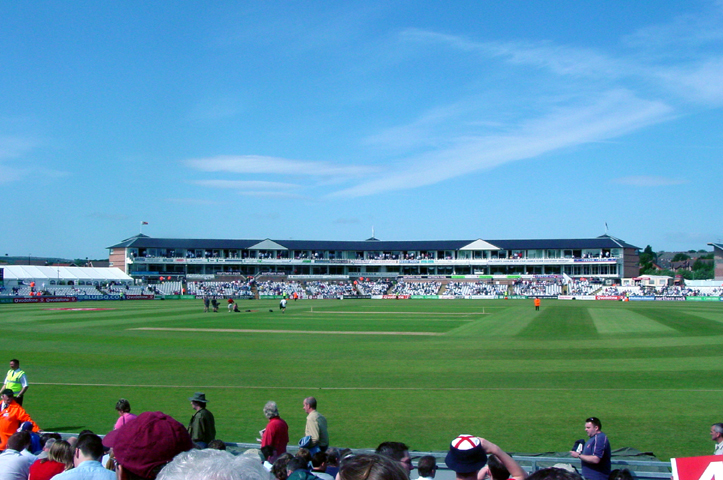 The club's acceptance into was made conditional on the building of a new Test match-standard cricket ground. Work began on the new ground at the Riverside, a spectacular location overlooked by , in , and development has continued in phases until the present day. Work on the outfield and playing surface began in . In its first three seasons in the County Championship, the Club played in a variety of locations around the county, but the Riverside ground was pronounced ready for cricket in time for the season, even though many of the buildings were still temporary or unfinished. The ground hosted its first game, Durham v Warwickshire, on , .

Other facilities at the ground continued being built over subsequent years, and the club's Don Robson Pavilion was opened by Queen Elizabeth II in . A Health Club is located on the boundary next to the Don Robson Pavilion. The full ground capacity, including permanent and temporary seating, is 15,000.The development of the Riverside into a significant cricketing venue was underscored in , when it hosted World Cup matches involving Pakistan, Scotland, Australia and Bangladesh, and then in when it staged the first match in the NatWest Triangular Series between England, Zimbabwe and the West Indies. In a One-day International between Australia and Pakistan was scheduled, but abandoned due to weather conditions.

saw the Riverside Ground raised to Test match status, but has so far only been used for three England Test matches, against Zimbabwe in , Bangladesh in and West Indies in . The fourth day of the West Indies Test, 18 June 2007, saw hitting a century on his home pitch for England against the West Indies, and so becoming the first local Durham player to hit a Test century at the Riverside.

In September 2008 plans were announced concerning further developments to the ground. These included installing permanent floodlights, and extending the County Durham Stand (at the South East of the ground) all the way round so that permanent seating surronds the entire ground, rather than the current temporary seating which is used for international fixtures, thus raising the ground capacity to around 20,000. A new entrance building will also be constructed to house the box office and club shop, as well as many new offices for club officials, a new perimeter road will be made, and a new hotel will be built. These developments were seen as a necesity as the England and Wales Cricket Board (ECB) specified that they must take place in order for the ground to maintain it's status as a Test Match venue.

The pitch can be likened to soldier's accounts of fields that were no man's land in World War One, with the track dodgy enough to make Steve Harmison look like Imran Khan.