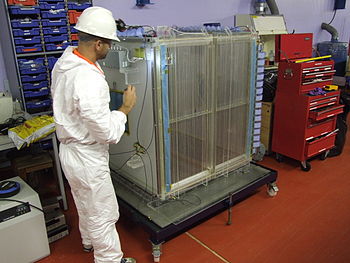 The DRIFT-IIb Detector removed from the vacuum vessel for maintenance.

The DRIFT collaboration ultimately aims to develop and operate an underground array of DRIFT detectors for observing and reconstructing WIMP-induced nuclear recoil tracks with enough precision to provide a signature of the dark matter halo.

There are numerous experiments worldwide attempting to detect the energy deposition that is expected to occur when a WIMP directly collides with an atom of ordinary matter. Ultra sensitive experiments are required to detect the low energy and extremely rare interaction that is predicted to occur between a WIMP and the nucleus of an atom in a target material. The DRIFT detectors vary from the majority of WIMP detectors in their use of a low pressure gas as a target material. The low pressure gas means that an interaction within the detector causes an ionisation track of measurable length compared to the point like interactions seen in detectors with solid or liquid target materials. Such ionisation tracks can be reconstructed in three dimensions to determine not only the type of particle that caused it, but from which direction the particle came. This directional sensitivity has the potential to prove the existence of WIMPs by their distinct directional signature. 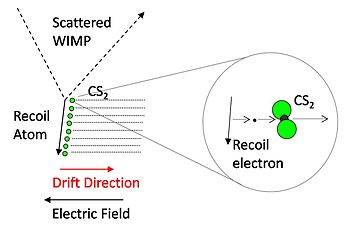 The DRIFT detector's target material is a 1 m3 volume of low pressure carbon disulfide (CS2) gas. It is predicted that WIMPs will occasionally collide with the nucleus of a sulfur or carbon atom in the carbon disulfide gas causing the nucleus to recoil. An energetic recoiling nucleus will ionise gas particles creating a path of free electrons. These free electrons readily attach to the electronegative CS2 molecules creating a track of CS2- ions. A cathode at -34 kV in the center of the gas volume produces a static electric field that causes these negative ions to be drifted, whilst maintaining the track structure, to the MWPC planes at the edges of the detector.